It's time to talk about the new Kill Team. It took us so long because the rules are unexpectedly deep and complex. Let's see if he can return us the interest in Warhammer 40K.

In the beginning, the initiative phase was added. Don’t worry, there is nothing new in it. It's just a definition of who goes first. Like in AoS, the order is determined each turn. The main difference is that the phases are played by the players at the same time. For example, before you turn to the psychic phase, both you and your opponent must move the miniatures. In order that was determined in the initiative phase. 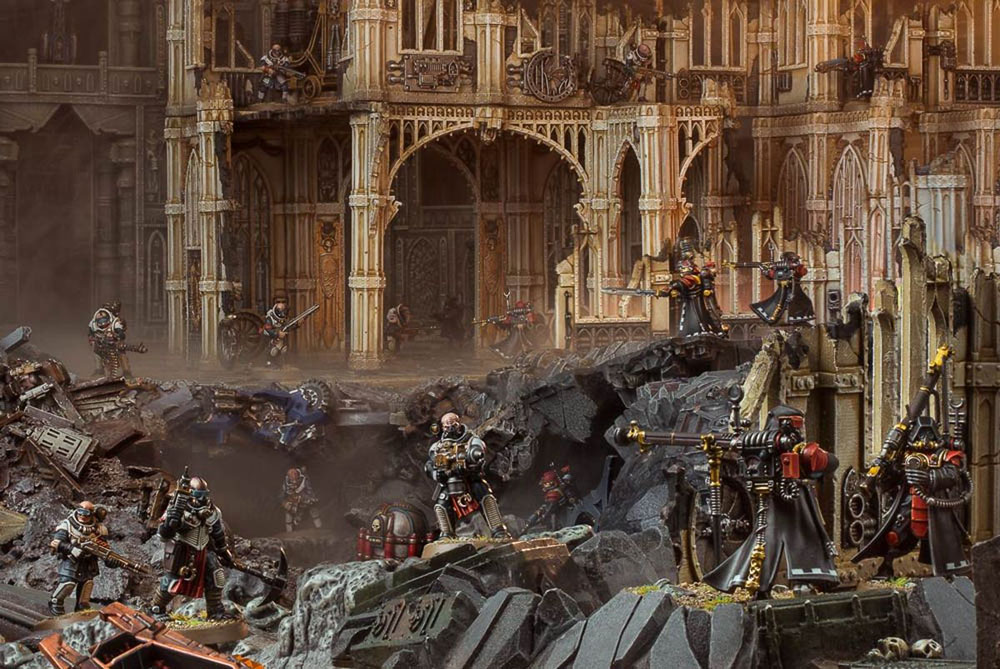 In movement phase, you move all your miniatures. In addition to the standard advance option, now you have an opportunity to get ready. In this case, the model does not move, but is activated first during the shooting phase. Likewise, in movement phase, you also perform a charge move. In response to it, the enemy can not only overwatch, as usual, but also retreat - 3 inches, so as to be further from the attacking model than before this movement.

Psychic phase is almost the same as in the main game, except that the Smite is now called Psybolt. All the rest remains unchanged. 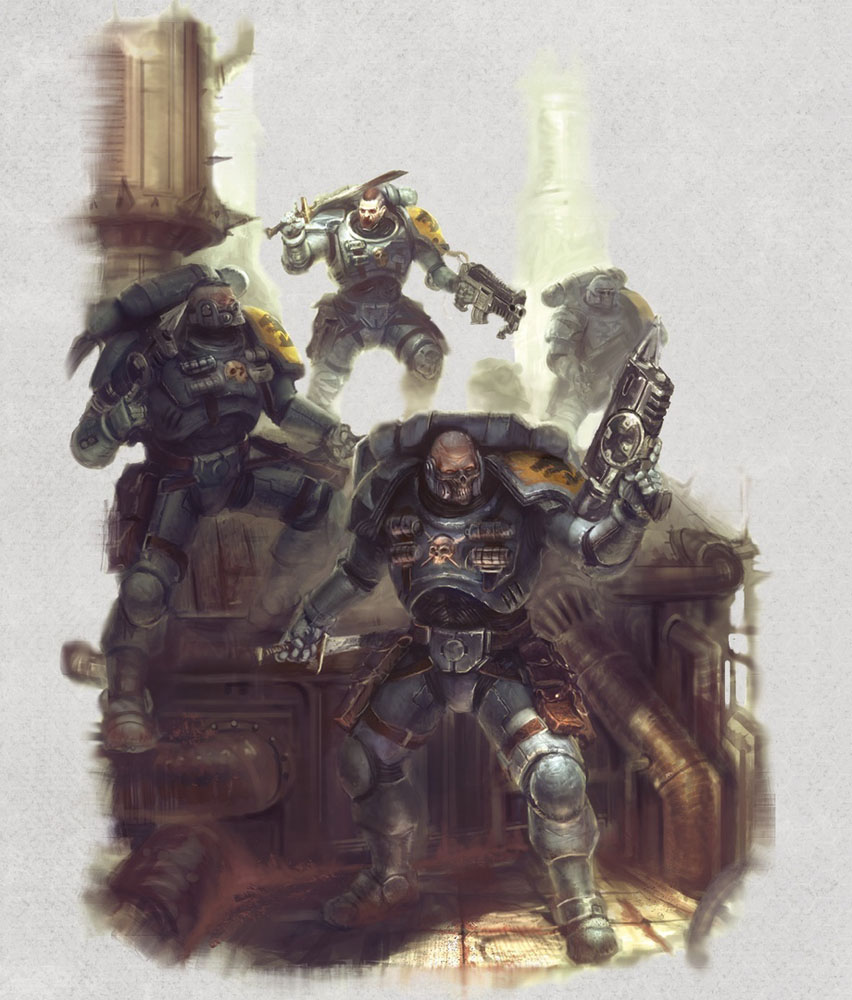 But the shooting has changed significantly. Firstly, you activate models one by one with the opponent - not all at once, as usual. We should start with the models that were readied in the last phase. In addition, there’s a number of modifiers for hit roll. Same thing with the close combat phase. In general, the mechanism here has not changed. 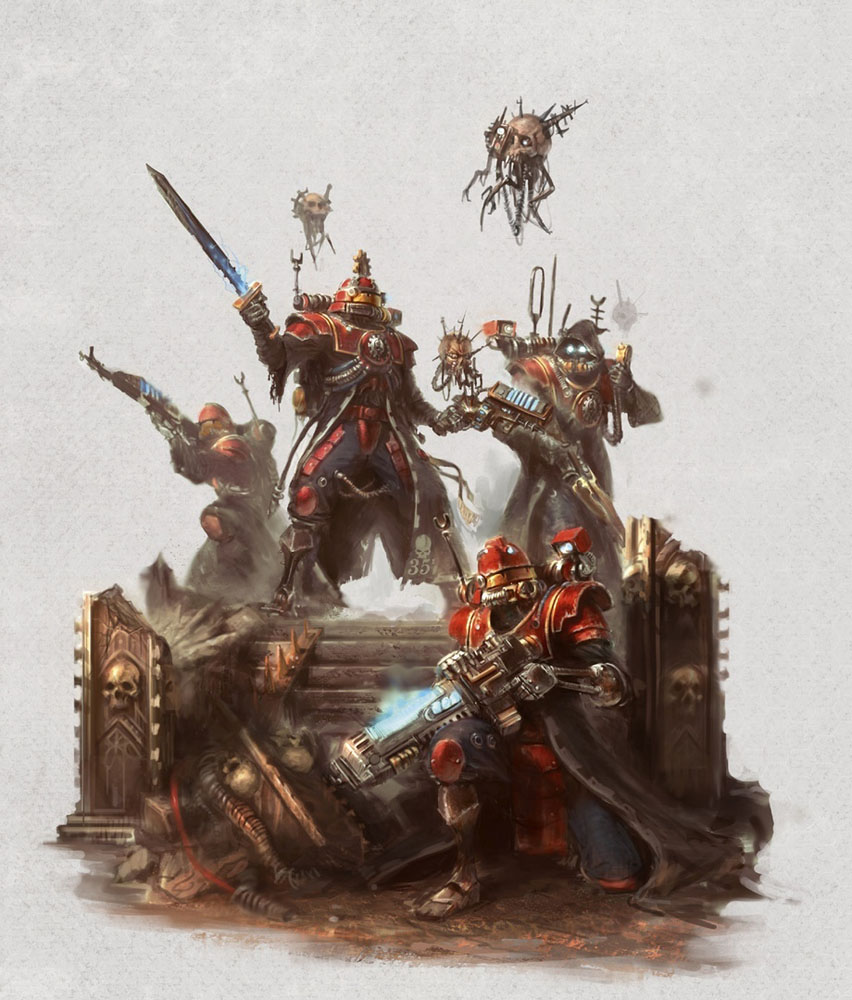 It is important that the model in this game does not die after it has lost all the wounds. In this case, you roll D6, subtracting 1 if the model is hidden from the distance attack, and adding 1 if it has already been injured before, summing the result for each wound. On 4+ model is out of action and no longer participates in the game. If the result is less - it gets flesh wound - for each such wound it gets -1 for hit, and, accordingly, is more likely to be killed. This mechanics allows your games with a dozen models to last longer, although it significantly delays the action. 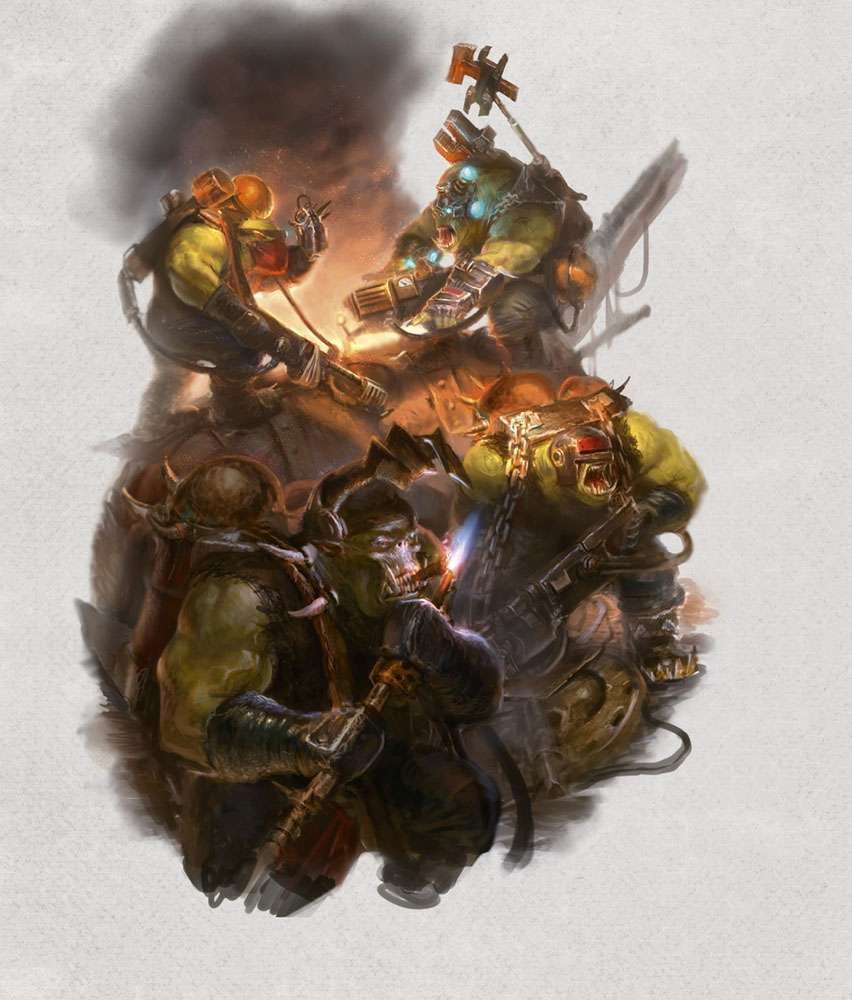 In the morale phase, if more than half of your models are shocked (more about this later), killed, or have flesh wounds, you roll 2D6 and compare it to the highest leadership in your team. If the test fails, the team is considered to be broken. And this condition stays for the rest of the game. Now, in each morale phase, you must pass leadership test with each model (standard, 1D6). Add 1 for each shaken and killed model, and subtract 1 for each model 2 inches from you. So, if the test fails - the model gets shocked status, and cannot do anything until the next morale phase, where it will have a chance to take the leadership test again. 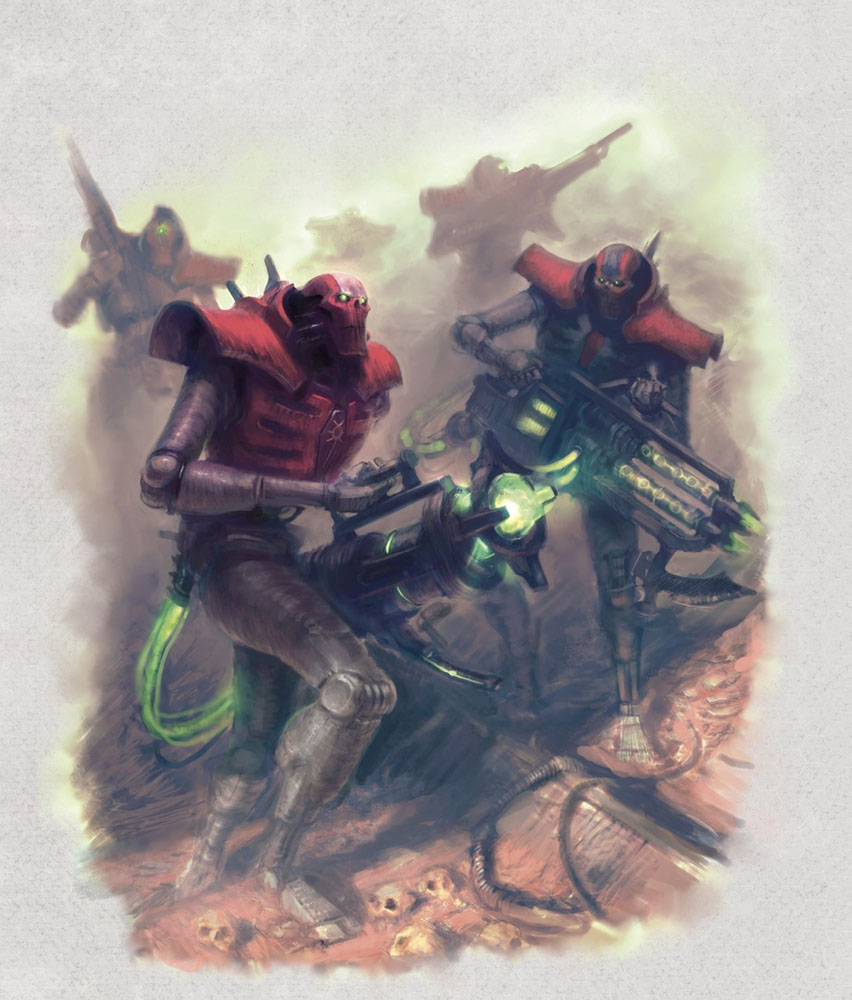 And these are just the basic rules. There is still a variety of rules for missions, stratagems, scouting, weather conditions, tunnels which you can travel. There are even rules for getting through the ruins - jumps, falls, etc. (hello, 6th edition!) Of course, there are leaders and specialists, as before. 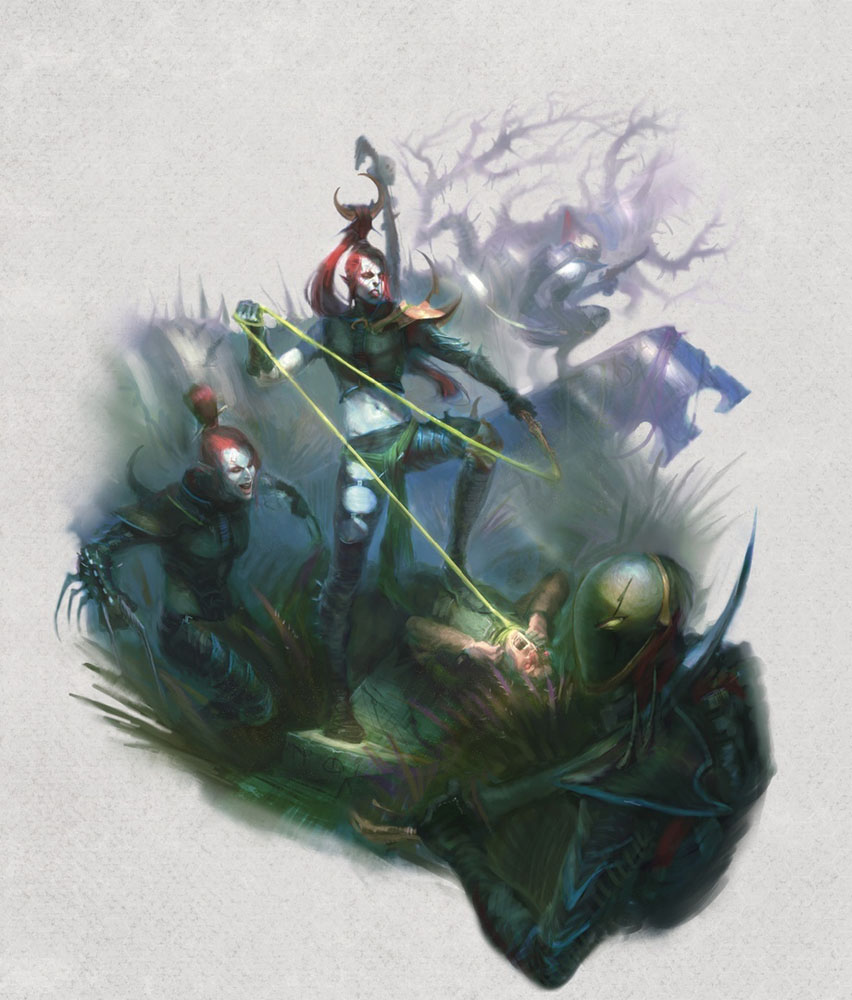 Few facts: all this is played for 100 points, but the prices are slightly different from the usual ones. The composition of the teams is limited for all factions - basically, these are troops options. The game requires a special field - 22 x 30 inches. Of course, we, as usual, are not limited in the choice, but the number of requests for this kind of battle mats shows that those players prefer to play the way they are told. 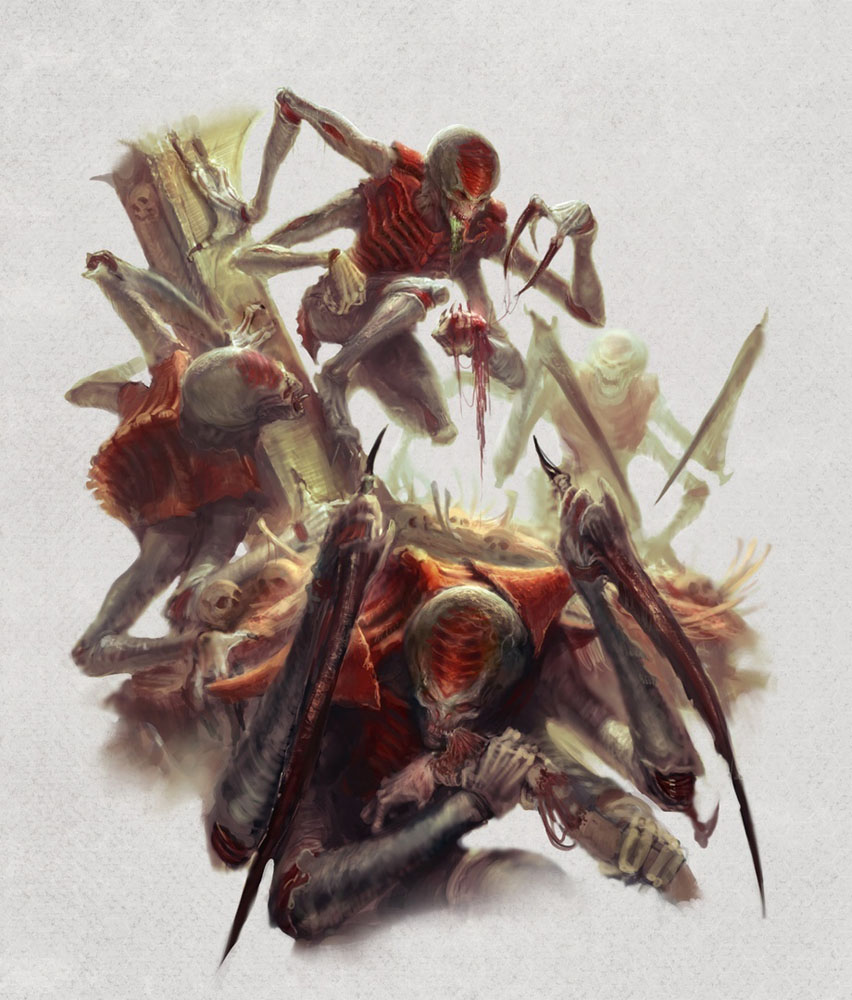 The new Kill Team looks much more complex and complicated than its predecessors, which, in essence, were the same as the main game, but with the management of individual models and options of specialists. The brain, softened by the rules of the 8th edition, boils, trying to figure out all the new nuances.

In general, playing the new Kill Team should be interesting. The Kill Team tournament is generally the best opportunity to spend a weekend with Warhammer. The main problem is that this skirmish will be appreciated only by those who already play Warhammer, and already has all the necessary models. It is inferior to other skirmishes, such as Malifaux and Infinity, and will hardly force those players to change the game.