Finally, we’ve seen the contents of the new Shadowspear set. As well, as the leaked rules. For the whole month all Warhammer community wanted to see this box, and now it makes me feel… weird. Why? Let’s look at it closer. Don’t forget, that everything you see here is an author’s opinion, and it can differ from yours. 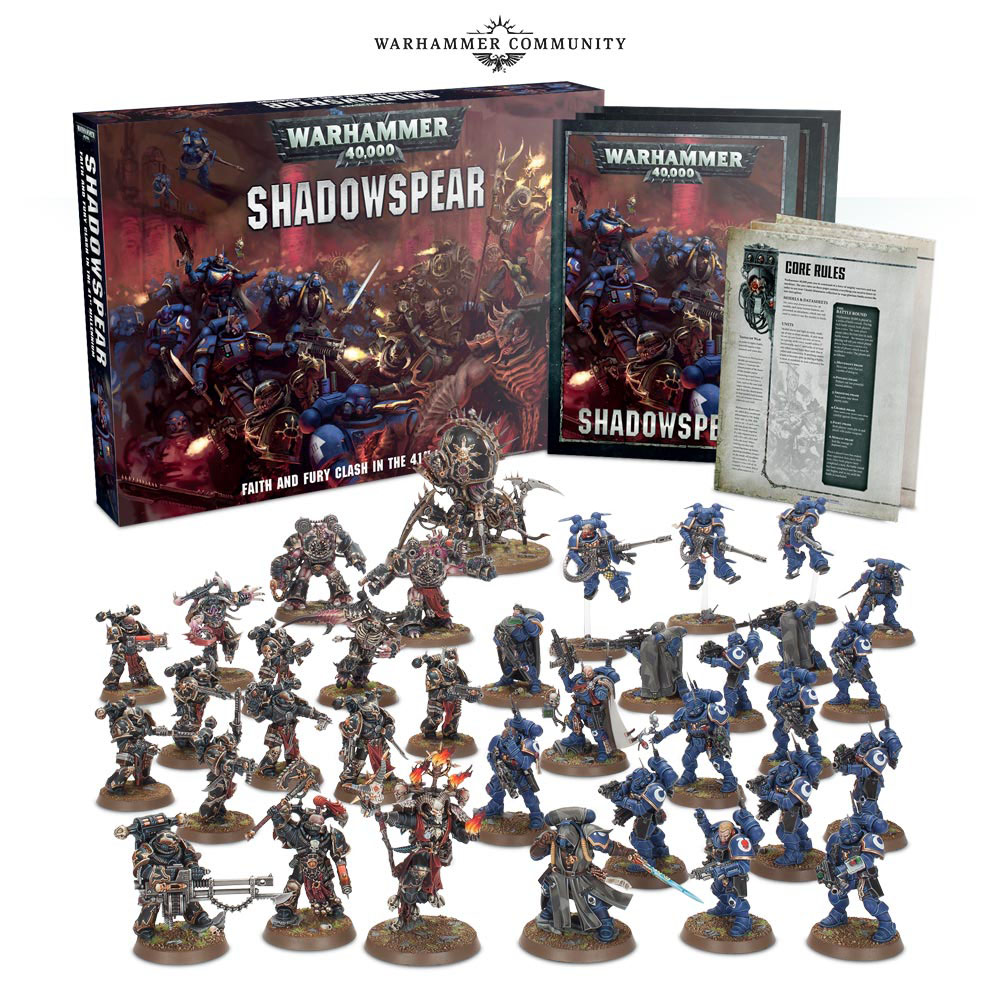 Infiltrators – new Primaris space marines troops. Practically, they are just Intercessors, armed with usual bolters, that auto-wound when you roll 6 to hit. Also, they have medic, who heals or revives models on 5+, and the guy, who blocks enemy reinforcements in 12 inches. And, probably, the main thing- they can be deployed anywhere, but no closer than 9 inches t the enemy. Spoiler – just like all new Primaris. Strange – GW changed all the rules like this (even Ravenguard lost it), and now they are giving it back. This makes this squad much more useful than Intercessors – mostly the same, they have no issues with delivery, and autowound is better than AP -1. Another question – who needs Intercessors now? 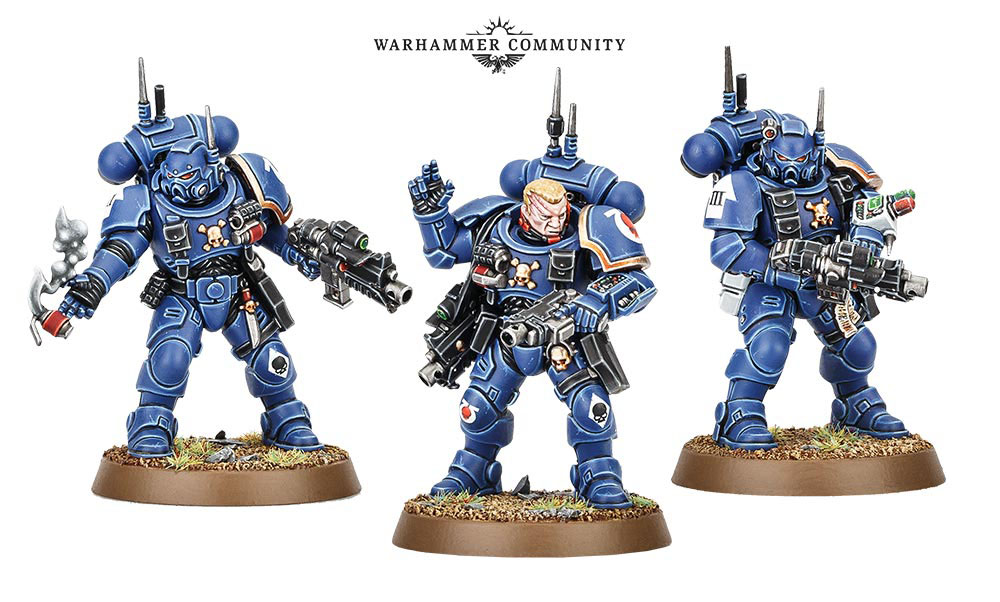 Eliminator snipers, who are supposed to substitute scouts, nonetheless are placed in the heavy support slot. Standard primaris with camo cloaks and where-you-want deployment are armed with sniper rifles with 3 types of ammo – each Str. 4, capable of targeting the characters. The first one is simple, but with D3 shots, the second ignores LoS and cover, and gets +2 to hit and AP -1. And the third one has AP -2, D3 damage and extra mortal wounds on 6+ wound roll. Looks interesting, but due to some unknown reasons, there are only 3 of these guys in the squad – absolutely not enough. Maybe there will be more of them with a separate box release, but in the current condition, they are not likely to be popular.

All these things were pretty nice. And now we have some problems. Suppressors are pure nightmare for any person who has at least minimal sense. Both in rules and in miniatures. Well, they fly. With heavy auto-cannons. GW didn’t hear about such sing as weapon recoil? Well, they did, since some Infiltrators hold their pistols with 2 hands. Also, Suppressors don’t have any flying devises. They have grav-сhutes, stated in the rules, and it would be ok, if they just let these guys to deploy anywhere. But they also have 12 inches move and FLY keyword. And they, basically…fly over their bases. Inceptors, with their massive armor and turbines caused no questions. Here it’s a mystery, what makes them fly. Autocannons are pretty usual, but with AP-2. And you know, what? Usual autocannons are HEAVY. So, this «mobile» squad can’t move, if you want to shoot effectively. So, it’s a quintessential nonsense in one unit. They could look so cool, if they just didn’t fly… 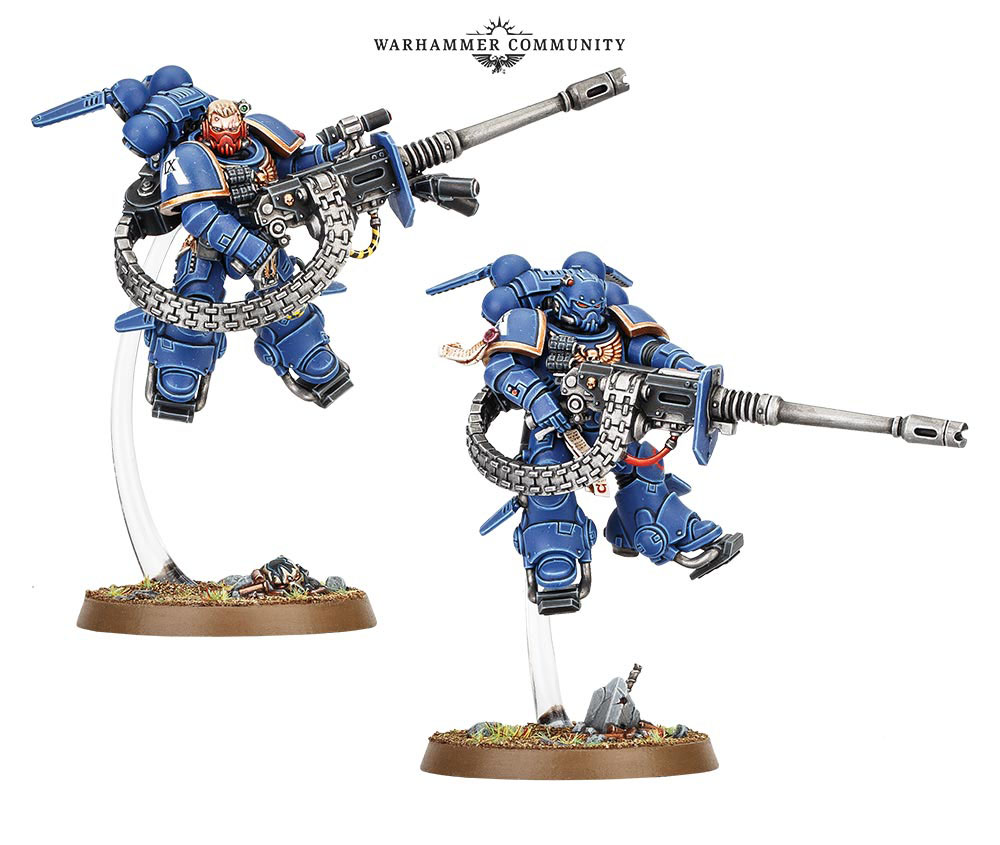 Nothing interesting with the characters – they are just a usual captain, librarian and lieutenant, but with all the new primaris abilities – concealed deployment, camo-cloaks, etc. Next – to CSM. And here it’s much worse. 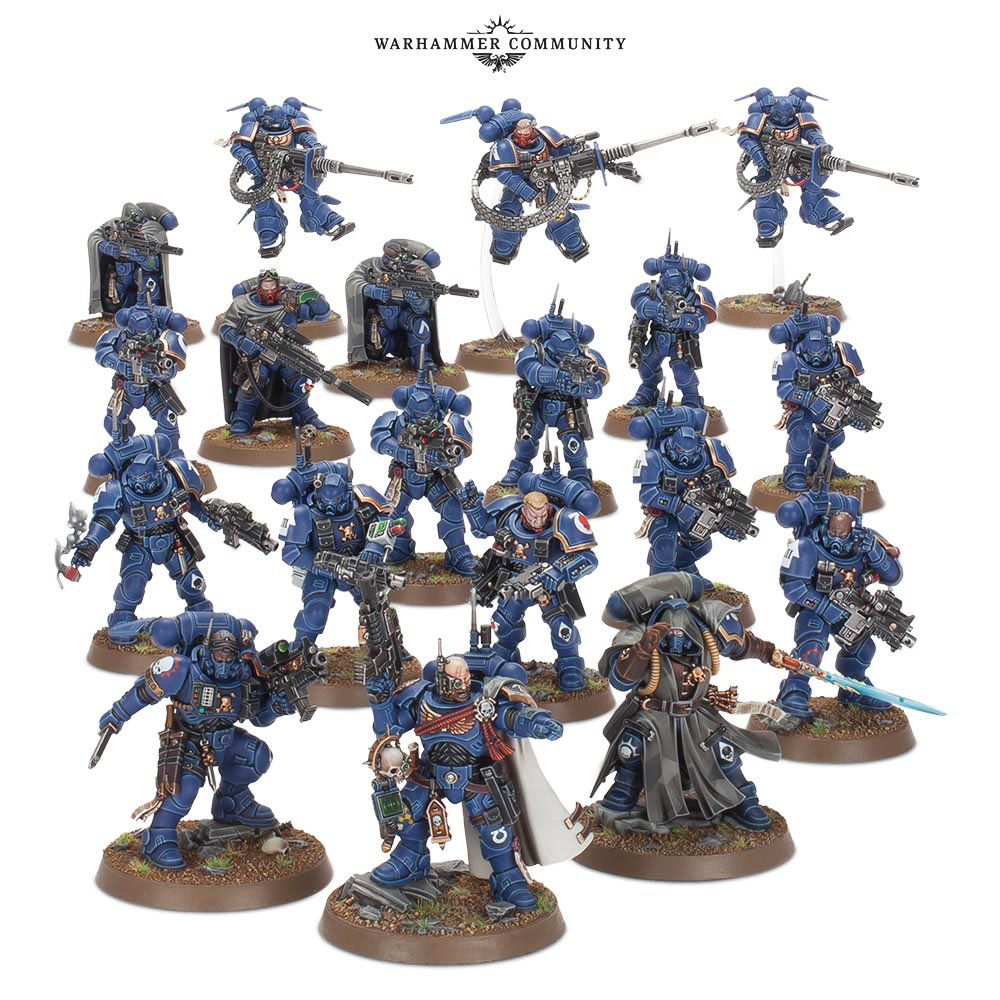 Finally, the long-awaited tactical squad. It might be enough for any chaos player, to already order this set, since the last time, we got new CSM tacticals, was in the 4th (3rd?) edition. And the new miniatures look great – the design combines old style with more details and realistic proportions. But… how to use this set? 3 guys with bolters, 4 with chainswords + plasma, autocannon and the champion. It can make basic 5 with shooting or close combat wargear, but why there are others? I mean, there’s no use mixing them in one squad – the half wants to get to the close combat, and another half tries to stay away from it. It would be great to change wargear here, but Shadowspear is an easy-to-build starter set, with no options and some miniatures doubled. So, we still have to wait for a separate tactical squad box set. If it will happen someday. 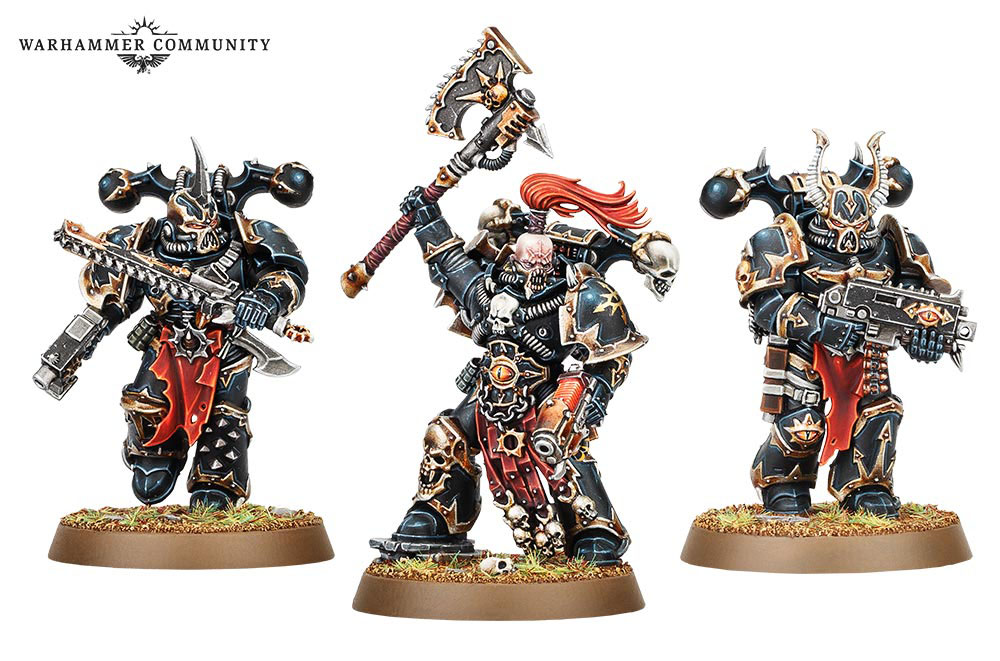 New obliterators also look cool. If you don’t pay attention at their metal swimsuits. But it’s ok. But why there are only 2 of them??? The squad should have 3, and this is how things has always been. Seriously, GW, why didn’t you put one more obliterator to let people use this box as a normal base for their army? Why loyalists have each special squad of 3 men, and here we get a hash of different miniatures? Really hope that the 3rd oblierator miniature exists and there will be a way to get it. They’ve got stronger, by the way – one more wound, T5, and the fists got back. If the price is the same – they are a must for any CSM roster. Well, they already were in every CSM roster. 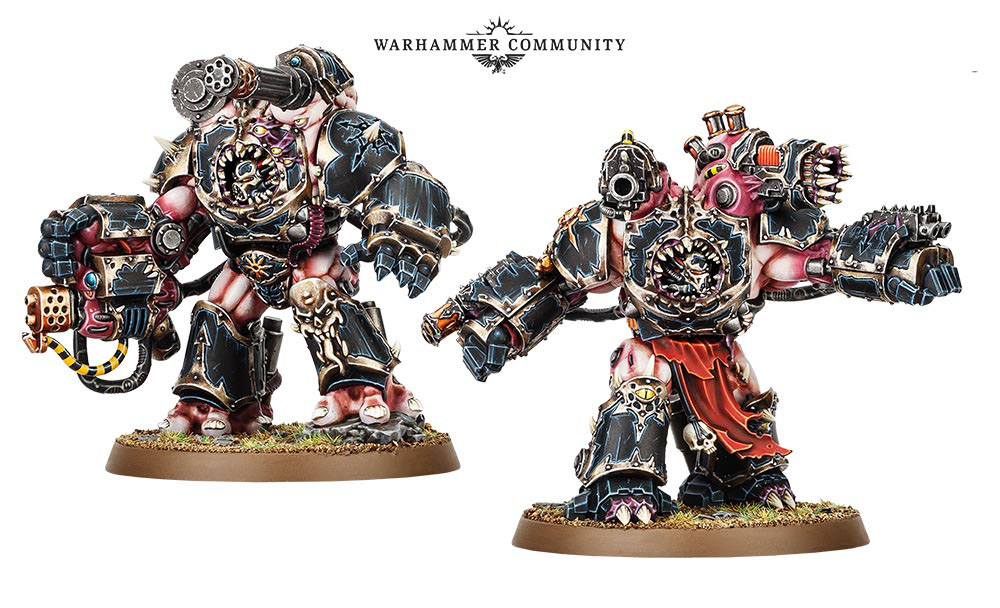 The Greater Possessed are stronger and better than the usual ones. 5 wounds and attacks< and +1 to Str to all allied demons in 5 inches (also, to themselves). But…they are used separately. You can add a second miniature to the squad, but they behave as separate unit when on the battlefield. I could also nitpick to the number here, but in contrast to the obliterators, they are a kind of a new unit, so they can do whatever they want. Practically, they are dangerous, but won’t go anywhere, since 1 close combat model is very easy to kill. Also, they are quite expensive. At least, the miniatures are great. 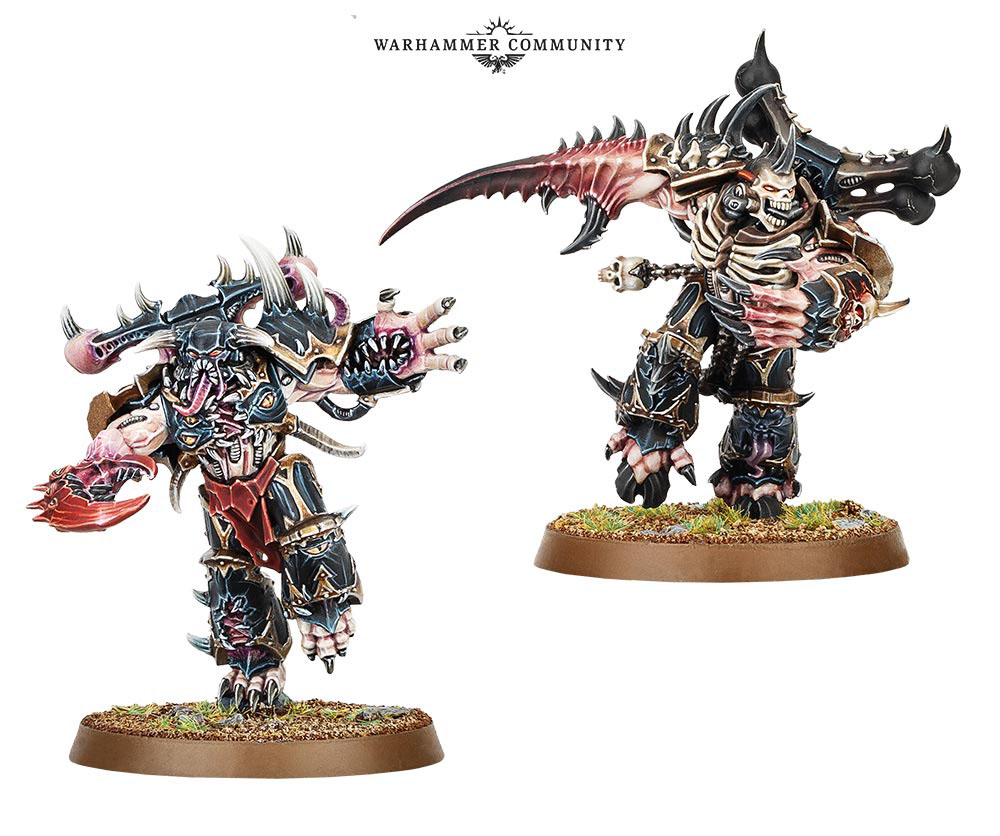 Venomcrawler is very interesting visually, and totally uninteresting practically. It can shoot a bit, it can fight a bit, but nothing really dangerous. Considering traditionally low daemon Engine BS and WS, and the fact, that it degrades in Strength (even shooting attacks scale from it), it’s practically useless. Yes, it gives +1 to the Demonic rituals nearby, but, honestly, who summons demons now? 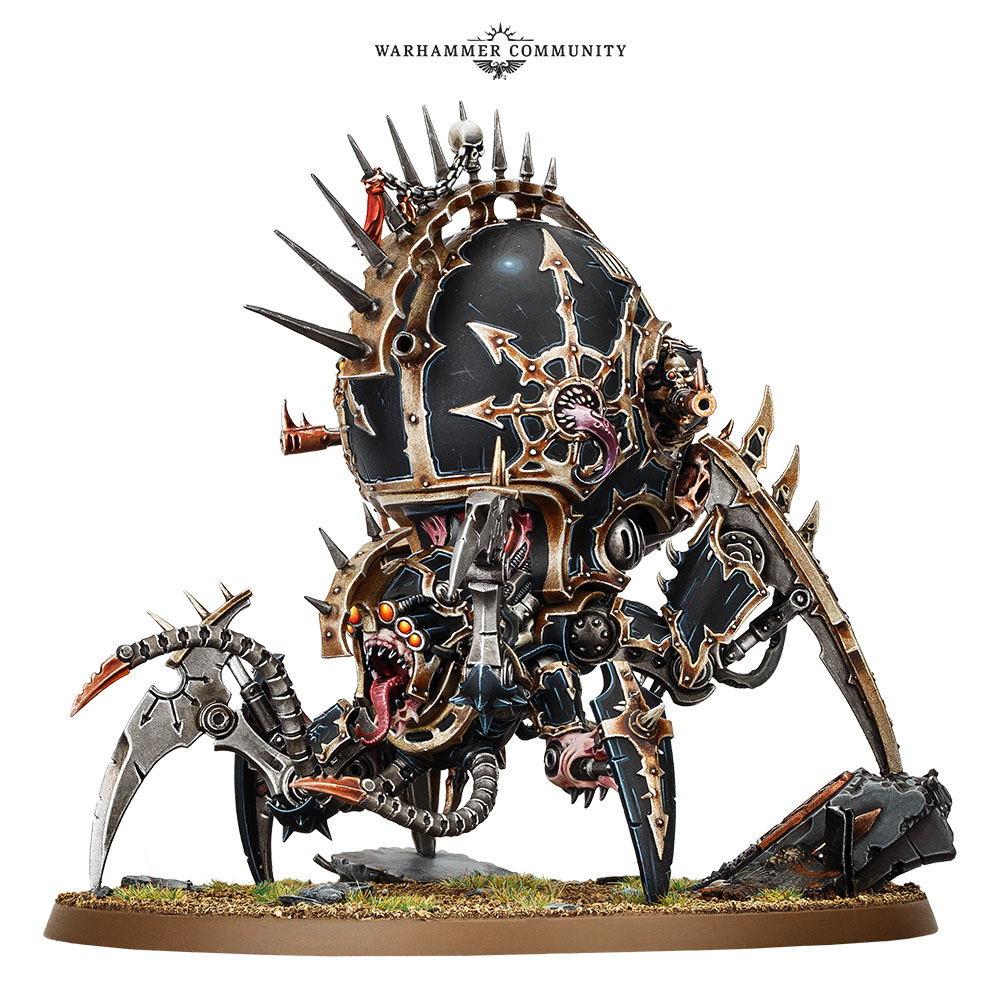 And the horned jumping wizard is practically a usual sorcerer, bur with 5++, and making all other psykers suffer the Perils on any double in 12 inches from him. 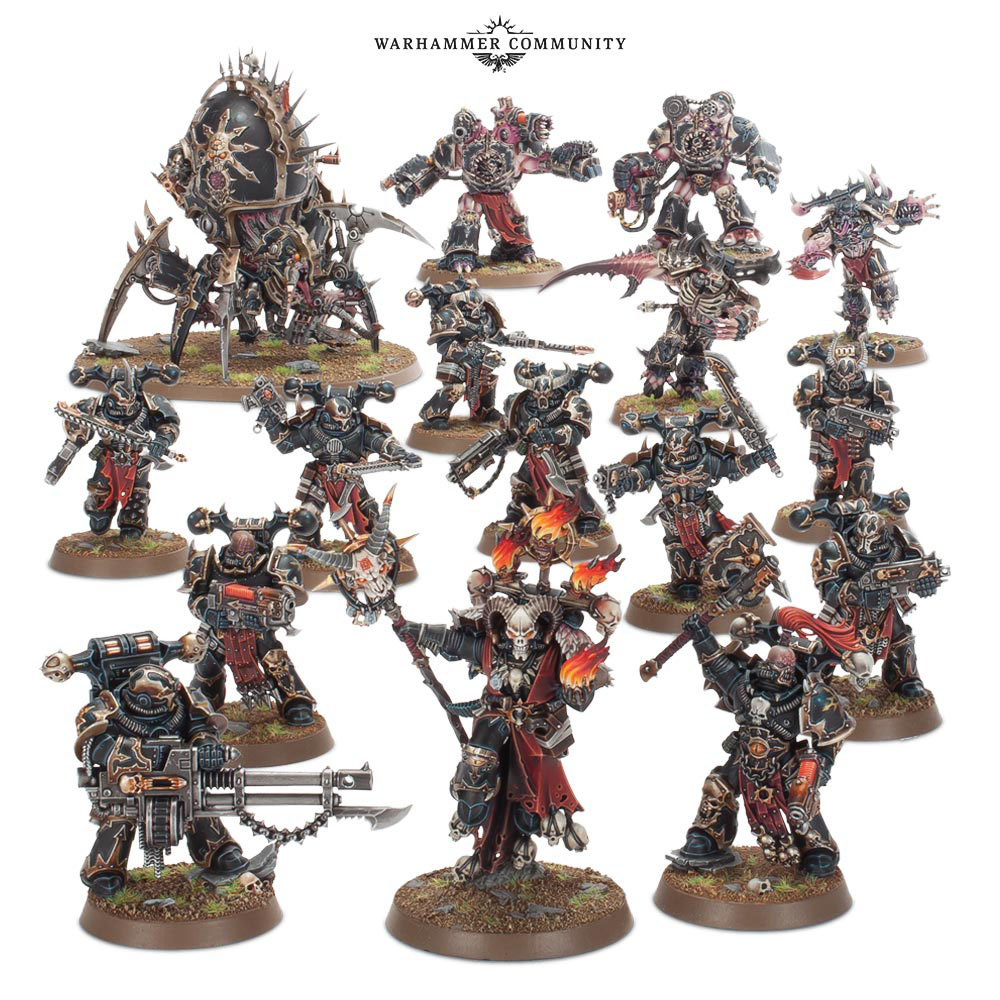 Well, after seeing this box I feel really disappointed. The miniatures are mostly good, but the squad sizes cause many questions. The set seems to be pretty balanced if you use only it to play, but surely, that’s not what we expected. Let’s just hope that further releases will be better, since there are still many unrevealed sneakpicks.