Finally, there’s something for Ork players to discuss! For example, there’s some info about Stompa – the big guy, who is such a pleasure to assemble and such a pain if you play with Index.

He had quite a lot of problems. In general, there were all the standard disadvantages of all superheavy units in the 8th edition: 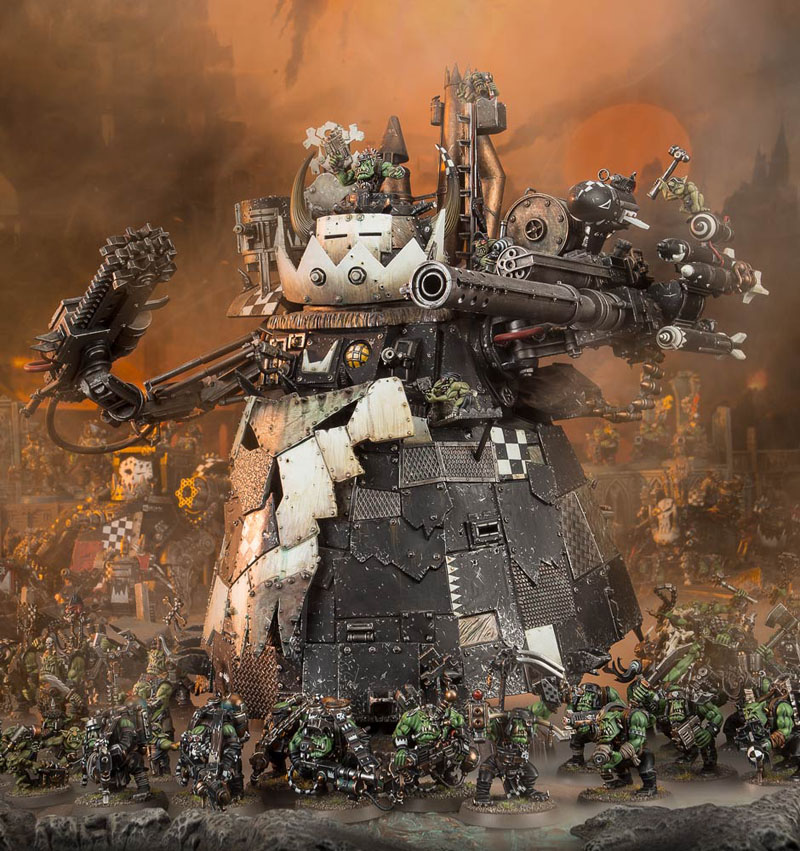 Extremely high cost: 973 points make him available only when you play a game above 2000 pts. Otherwise, when Stompa is dead, you are left with almost no army. And he’s quite easy to be killed.

Vulnerability. 40 wounds with Toughness 8 – it’s definitely cool. But don’t forget about the amount of shooting we usually deal with. Any enemy will focus all the fire at this toughguy as soon as he appears in the table. And 3+ armor is not the best protection. Sure, you probably put and will put a Mech inside. So, 5++ seems to be the only save you have the most of the time. A couple of las-devastators units is still enough to make Stompa degrade until the middle of the table. 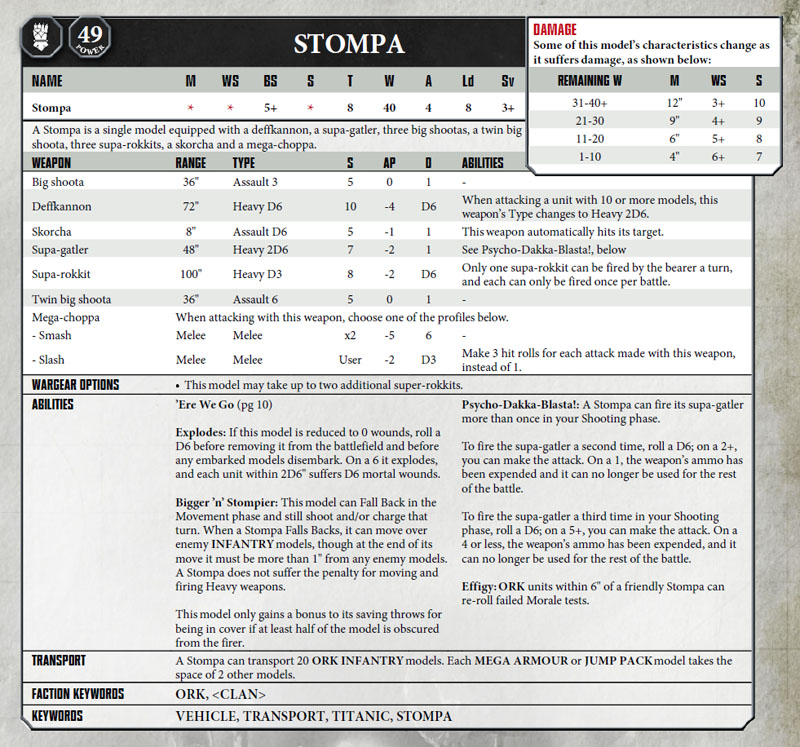 And this table – is the biggest problem, really. After Stompa loses half of the wounds, he starts to move 6 inches and gets WS 5+ which makes him almost helpless. Strength degradation, strangely, did nothing, since even Str 7 is still enough to wound most infantry units on 2+ and doubled mode is enough to do this with vehicles.

Low firepower. It seems that fire potential here is quite big – high strength and AP on all the main weapons, D6 damage. But, again, this all is ruined by random, which is everywhere. D6 shots usually mean 3, or sometimes even 1. Add here 5+ Ork BS and again, you get a helpless giant. 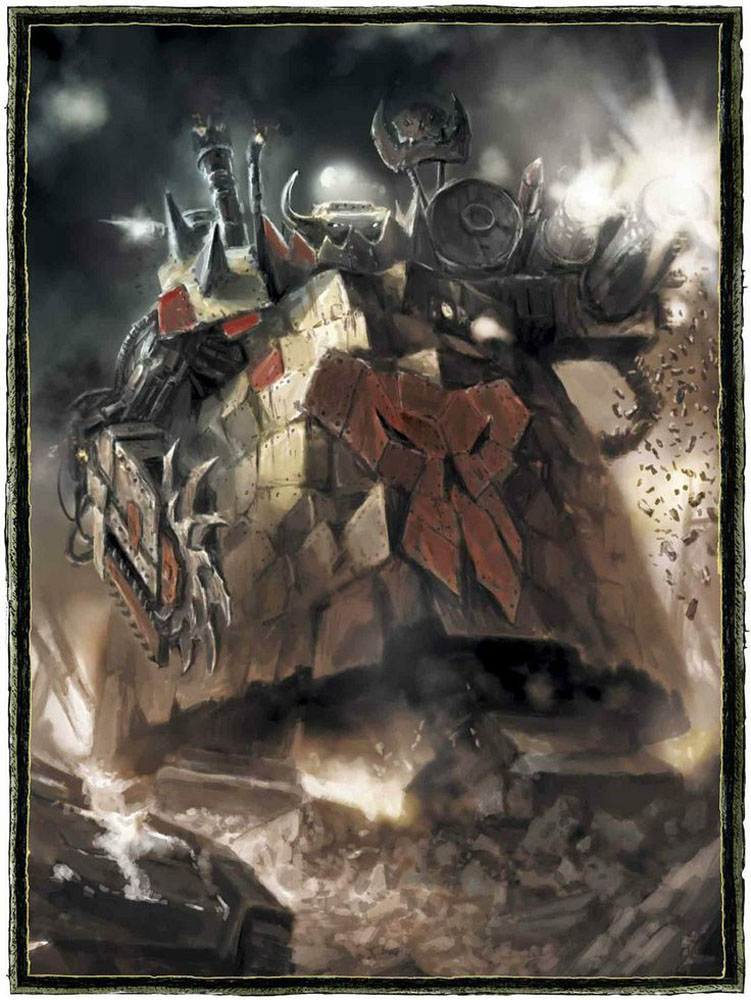 Now many things changed for the Stompa. Let’s look at all the same issues.

Firepower increased dramatically. Obviously, Games Workshop finally realized, that random is not such a fun and decided to regulate it somehow. As you can see, all the main weapons now get much more shots. Sure, this doesn’t prevent you from 1s, but anyway, there will be more shots. Also, along with Stompa news we got Bad Moons tactics, which lets you re-roll 1s to hit. So, this already looks better. 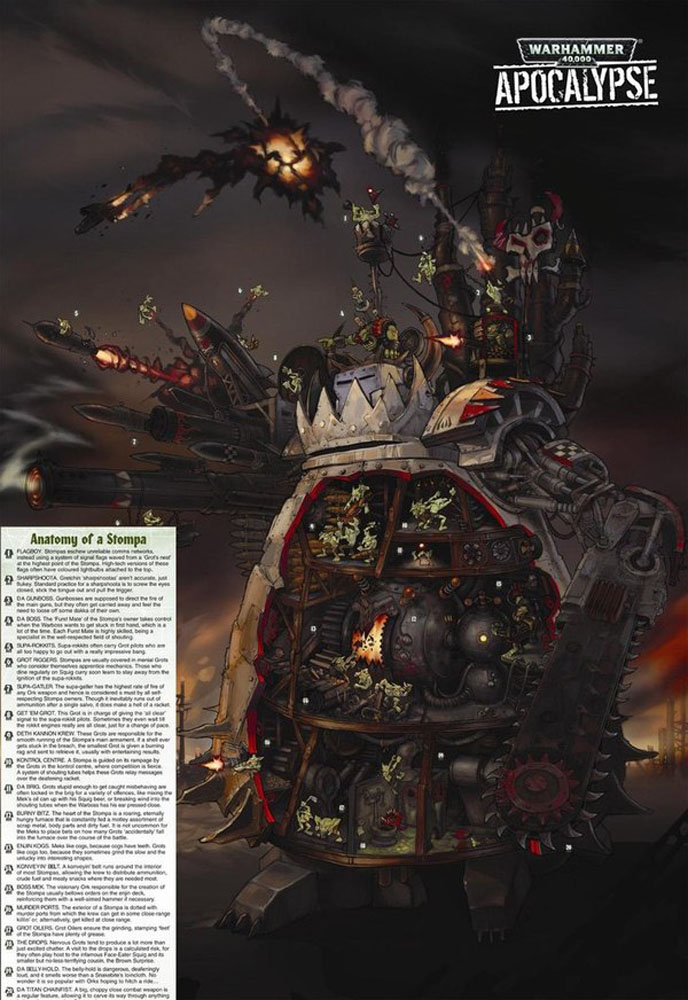 Degradation table was also reworked. Movement is still the weakest point here. And the enemy is likely to slow Stompa down somewhere in the middle of the battlefield. WS is also the same. However, now we have a degrading number of attacks – could seem bat, but also, we’ve got more attacks. At the point when you start having fewer attacks that you used to in Index, your Stompa is almost dead, so, there’s no difference. So, don’t rely on close combat here. By the time you get to the enemy, you will likely be helpless.

The vulnerability is supposed to be fixed with rigger grots, who will fix D3 wounds at 2+ at the end of every movement phase. Random again, but at least, there’s a chance, that you live one turn longer. And this means one more volley. 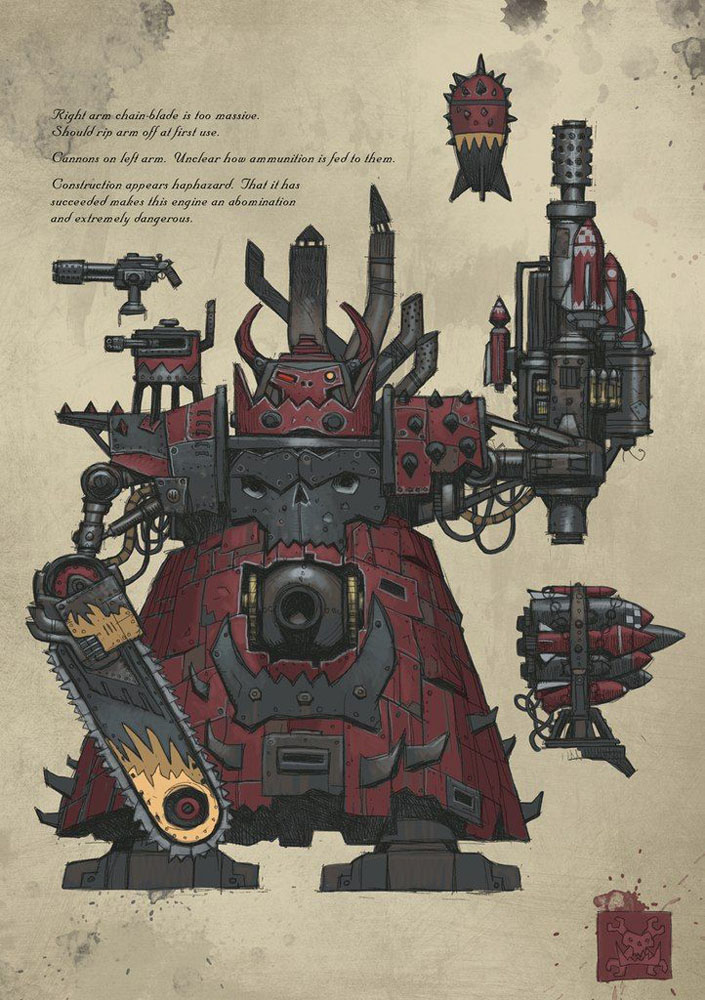 No info about the cost yet, but, surely, if won’t go up. If this giant loses at least 100 points, he will become significantly more useful.

So, the overall impression is ambiguous. Stompa definitely became more dangerous. The firepower is horrifying. If you are lucky with dice, you have a chance to destroy all enemy key units at the first turn. And if you are not lucky with dice…why are you still playing Orks? However, the problem of vulnerability is still the same. And the enemy will try to destroy Stompa much more intensively now. So, it may be a good idea to hide Stompa somewhere in the back – the range of its main weapons let it stay intact from the most anti-tank arms. But this works only if your opponent plays stand and shoot army.

So, how would you use Stompa?