How to play: Lord Discordant

You’ve surely heard about Lord Discordant – a new CSM character. And, surely, you’ve heard about his problems. He has nice stats, fighting potential and useful abilities, but also, he’s a lucky owner of 12 wounds. Which practically means, that everyone can shoot at him and destroy the threat before he does anything on the table. We’re really sad that such a cool unit stays on the shelf, so we decided to find out how to use it effectively.

The easiest way, of course, is to hide him somewhere in the back and share +1 to hit to the closest demon engines. But this can be done by the Dark Apostle, who is much cheaper, and this way you ignore close-combat potential of Lord Discordant. And it’s really huge – he, himself fights with the glaive and mechatendrills, Plus, his… steed also has some pain to deliver, with even two sets of weapons, if you left him a Techno-virus injector (And it’s a good idea). Also, don’t forget, that this unit is a DAEMON, which means he gets all the daemonic buffs. So, let’s try to lead him to close combat. For this, we need to increase his mobility and protection. 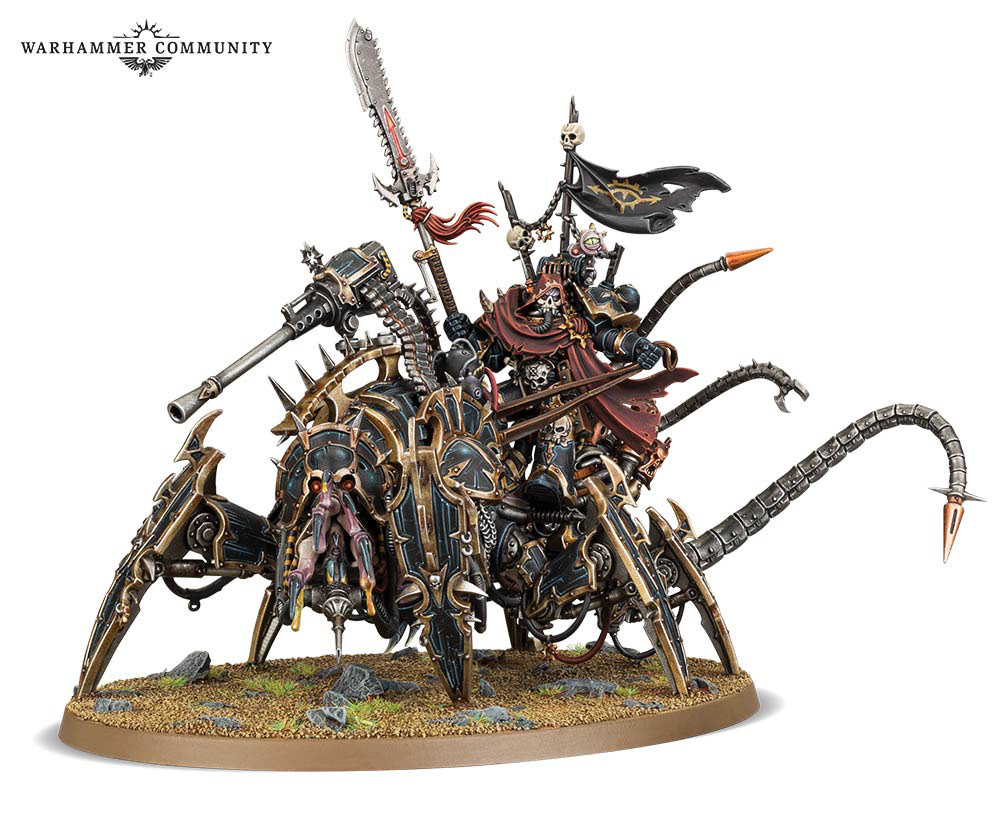 Both of it can be found in one of the Vigils’ second part formations. Soulforged pack – especially for daemonic engines. Here, you immediately get +2 to your movement, and a possibility to double the number of wounds for the purposes of damage table results. Just for 1 (In fact, 2) CP. That’s exactly what we need – our Lord will definitely suffer some damage on his way to close combat, and this will help you to ignore it and attack at full strength.

There’s also a stratagem that gives a charge after advance, but that means, you spend one more CP on 1 unit. It’s much easier to make your Lord a Red Corsair – the same effect, but for free. Or, leave him whoever you want, but take a mark of Khorne and Talisman of Burning Blood. There’s also a charge reroll included. And it’s still free unless you use any other artifacts.

So, now we can move 14+D6 and then charge with reroll. Sounds like a reason to take a Baleflamer – you’ll definitely have some targets after such jump. Nonetheless, autocannon looks better on the model. Now it’s time to think about his durability. 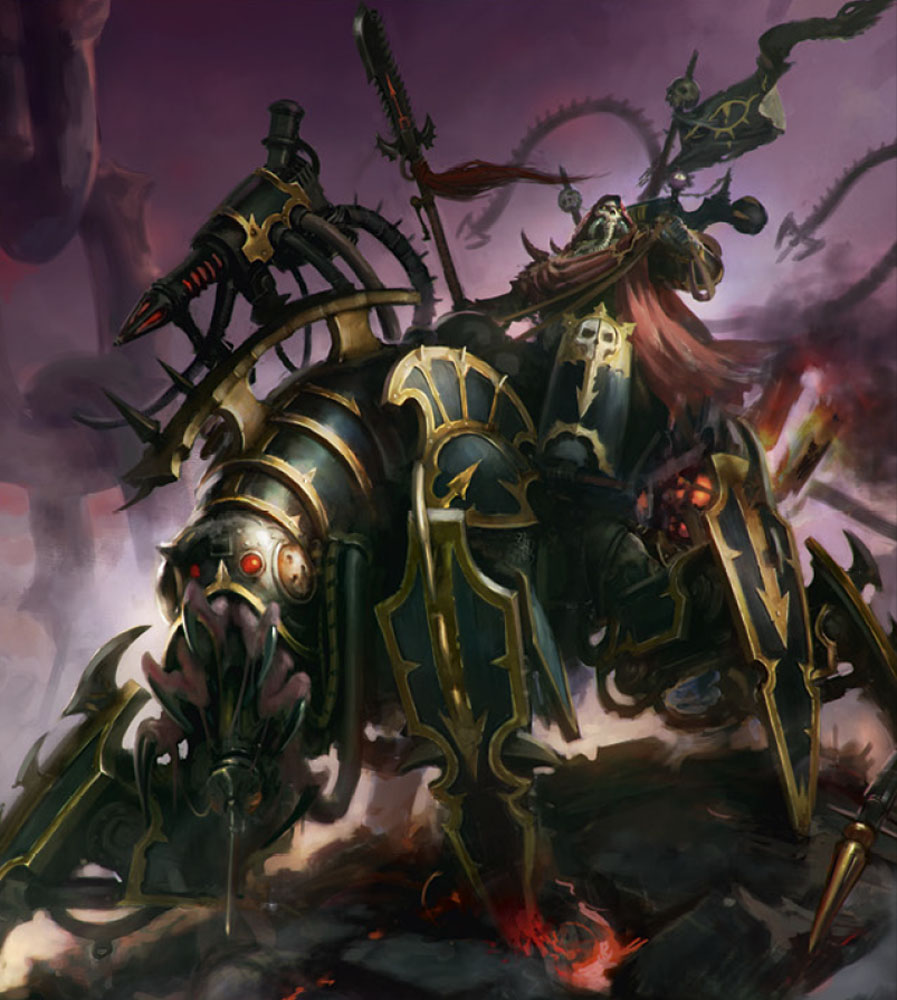 The most obvious thing – the Dark Apostle’s prayer that gives -1 to hit, when enemy targets this unit. It’s applied before the turn starts, so, the Lord doesn’t need to wait for the Apostle while moving. But it gets more difficult with the 2nd turn. Still, if Apostle runs, there’s a little chance for him to stay in touch. Unfortunately, this doesn’t work for the Cursed Earth spell, that would also make our Lord better. The Master of Possession (a usual sorcerer can’t cast it) must remain in 6-inch range so that the bonus to the invuln would work. He can also cast a reroll of 1-s to hit and to wound, or regeneration, which is also extremely useful. So, maybe you shouldn’t rush into close combat at the first turn. Just take a convenient covered position in the center of the table, and let the supportive characters cover you with the auras. 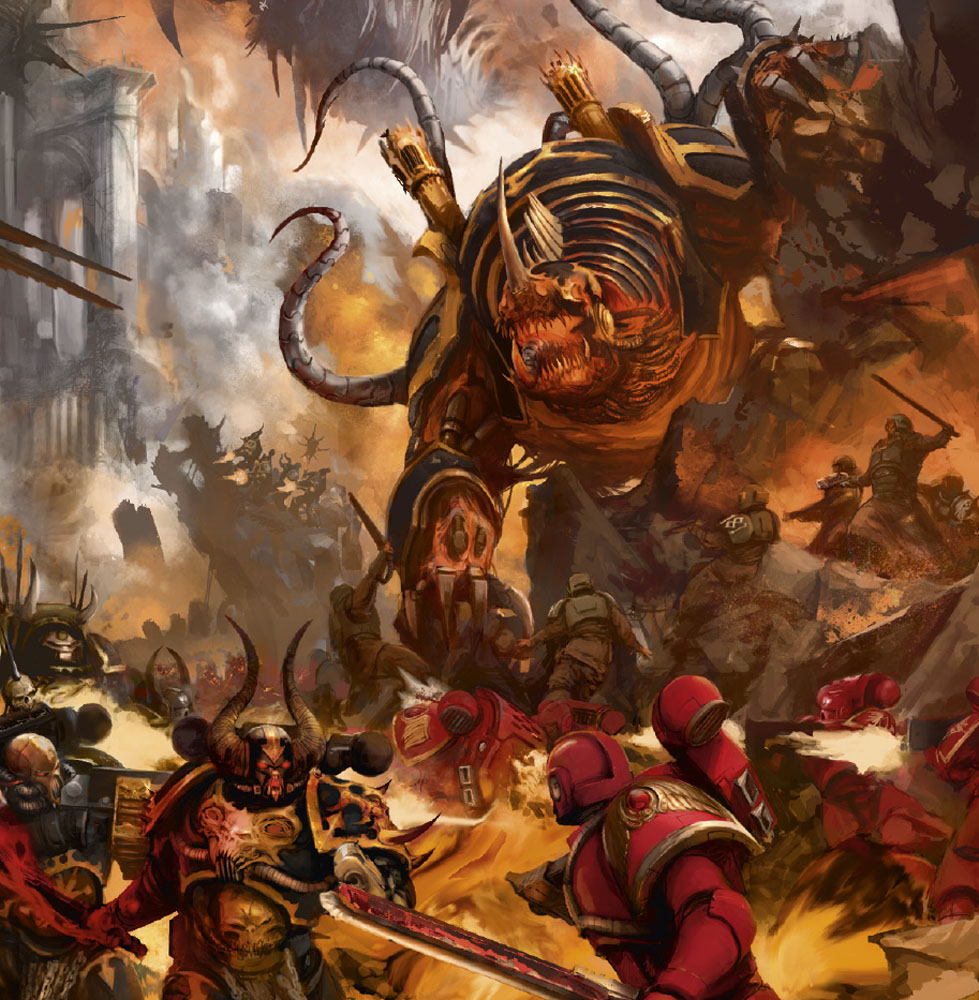 Sure, it would be stupid to spend so much effort on one unit. So, we need to take the company. All spell bonuses fork as an aura, and the Lord himself shares +1 to hit, which daemonic mechanisms require so much. So, this is the moment when you take you daemon engines on the battlefield. Just use the ones you like more. But consider that new Venomcrawler is unexpectedly better than a plasma Maulerfiend since he has almost the same guns, but with longer range, and doesn’t get a penalty while moving. And he’s cheaper. Greater Possessed also fit in this company, since their bonus to strength will be useful both for the Lord and for Venomcrawlers, since their cannons scale from the strength. 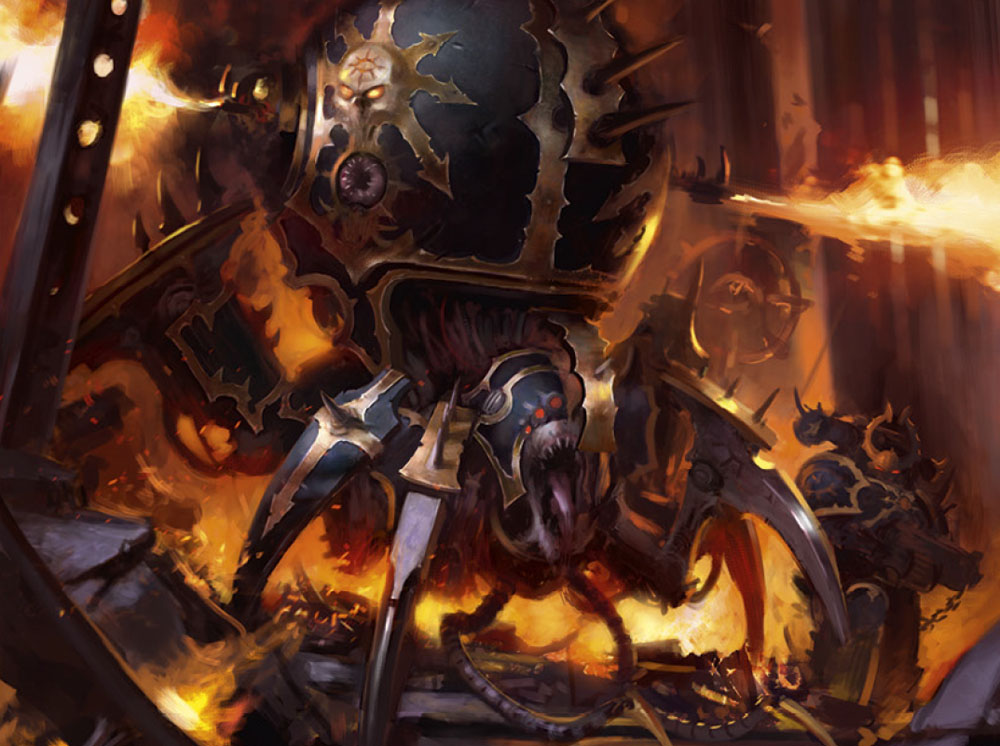 It’s quite interesting, how we switched from a single unit to the whole army. All the sings we’ve mentioned should be covered with some troops – for example, cultists to cover the characters. And, also, it’s useful to draw some part of an enemy’s attention from this battle group – deepstrike some terminators. And send the possessed or berzerkers in Rhino from the other side. (There's also the idea how to use new Master of Executions). And, sure, cover them with some heavy Havoc fire. This seems like a nice roster – diverse, based on combination and synergy. And, also, you’ve taken some unused models from your shelf.