How to collect Death Guard with a new battleforce

How to collect Death Guard with a new battleforce

Games Workshop announced a part of Christmass battleforces for Warhammer. And there’s a Death Guard set there. Let’s imagine that you’ve bought this box and want to start playing. What should you take next? Also, let’s see, how does this codex feel after a year since the release. 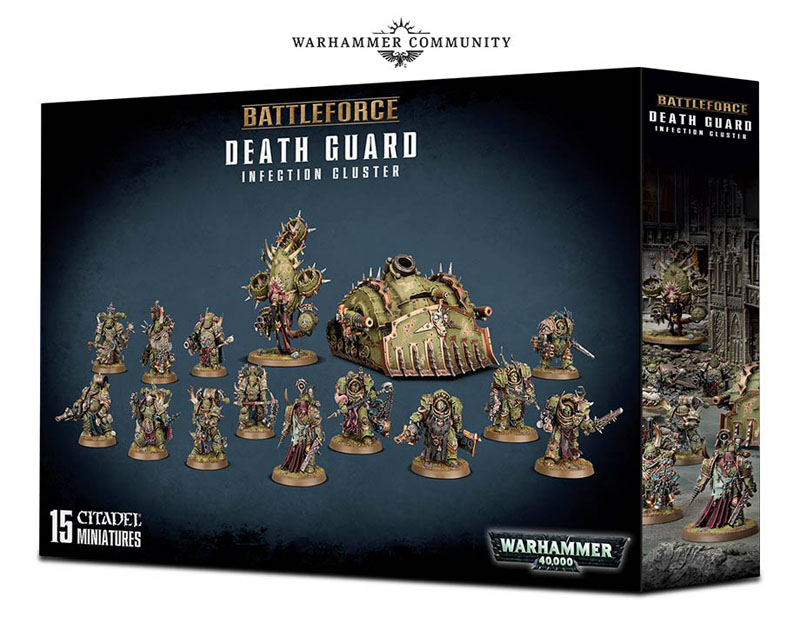 It may seem strange, but there’s no commander for this army. Plague Surgeon dwells in the Elite slot, and, honestly, is one of the weakest characters in the army. So, think about someone to lead your army. Probably, a part of Dark Imperium starter is a good idea. It’s cheap and gives you one more Drone with useful wargear, 2 (or 1) squads of extremely required Poxwalkers, enough to fill 2 extra troops slots for a batallion detachment, Plague marines for conversions and alternative use, and Malignant Plaguecaster. This guy must be in your roster because there are many useful spells in this codex. He can both support close combat units or cover those who are left behind. Starter lord is totally useless – he does all the things that Typhus can but has no psychic powers and special abilities. Considering the minimal price difference, it’s better to buy Typhus. The miniature is awesome, by the way. 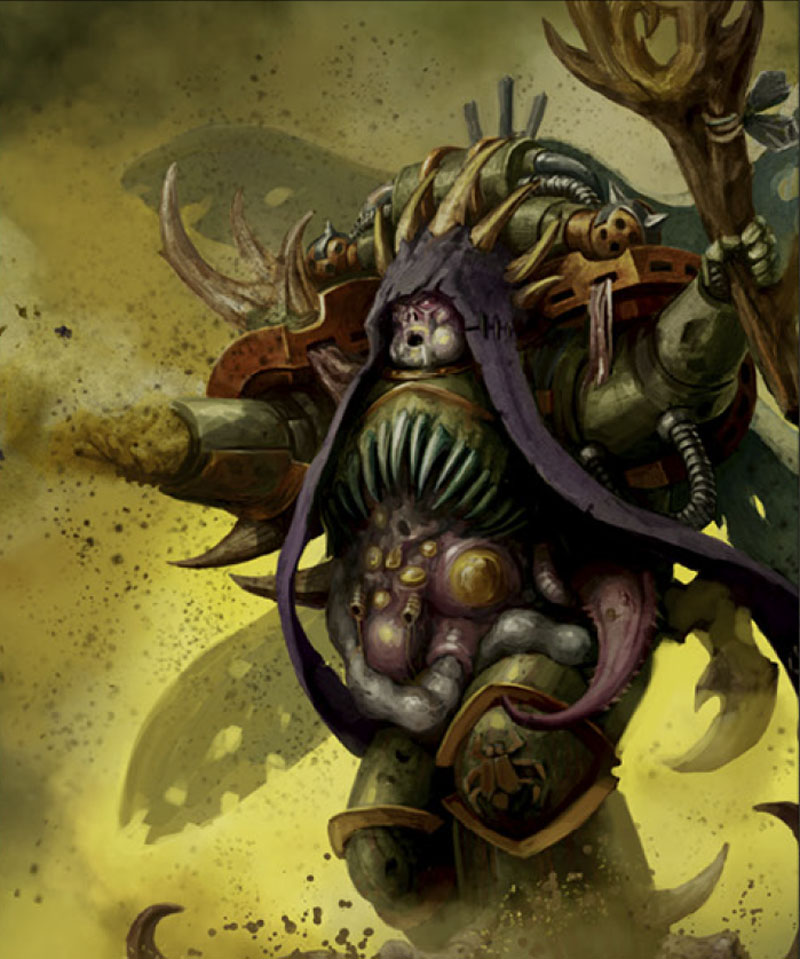 Plague Marines are Jacks of all trades in this codex. Don’t count on them too much, though – they are still very expensive space marines with only one wound. But they can capture objectives and destroy small units quite well. The easiest way is to take 2 Blight launchers, a plasma gun to sergeant, and send them to one of the middle objectives in Rhino (you have to buy it).

Close combat loadout is an interesting choice since maces deal 3 damage and flails are perfect crowd killers. The problem is that it’s still quite expensive and wielded by single wound models. Half of them won’t even reach close combat. If you are playing against shooting army – don’t even think about it. But if your enemy doesn’t mind to fight hand to hand, you may add here your Plague Surgeon, Tallyman to grant re-rolls and a Plaguecaster to increase toughness, strength and a chance to wound the enemy. Such old school death star can destroy a lot of units. If it manages to come to close combat. The main thing – take 7 plague marines. You critically need 2 guys with maces, 2 with flails, and a sergeant. So, the other 2 can be sacrificed with no regret. There’s no use to take 10, since you need space for the characters. Unfortunately, there’s only one mace and flail in the set, so’ you’ll have to find extra ones somewhere else. 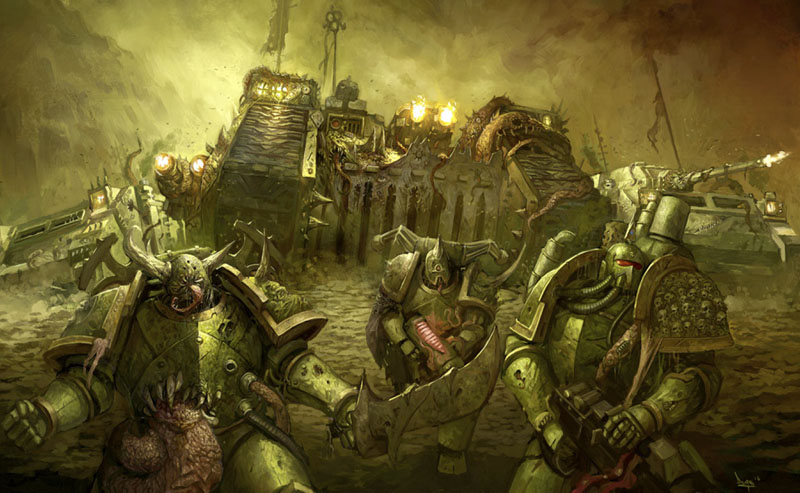 The main problem of terminators box is the same. They have one of each special weapon. So, think about plasma and melta details in advance. Sure, you can give bolters to them all, but in this codex you have a lot of anti-infantry tools, but few anti-tank solution. So, if you expect a lot of tough units, be sure to take enough meltas. If you are taking plasmas, it will be a good idea to give Blight launcher to one of the terminators – the purpose of this gun is the same, but it costs less. Don’t expect these guys to be good in close combat. They have nothing to do against good fighters. And also, now we can’t move them with Warptime after deepstrike. So, use them as plasma/melta drop. It would be nice to keep them alive longer, since they cost almost 300 points and you will regret in case of their early death. 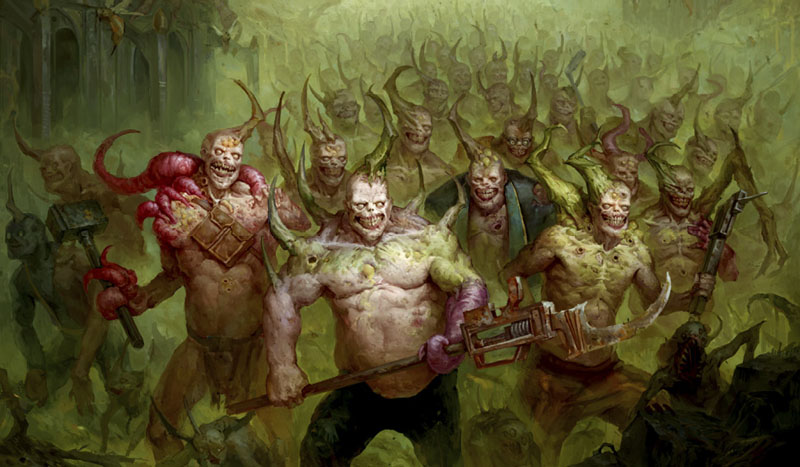 The drone undoubtfully gets Plaguespitters. This is a great vehicle that can fly far, advance, and then hit the target automatically with flamers. It’s quite durable and enemies don’t pay much attention to them, so it can go behind the enemy line, clear objectives and destroy small enemy units.

The mortar unexpectedly does the same. With plaguespitters option, it costs less. At the same time, it’s more durable and has some more shooting attacks. It’s a mystery, why its only drawback is a move just 1 inch less and can’t fly. So, you can use it along with the drone until the price isn’t fixed in Chapter Approved. However, Enthropic cannons can also be useful against vehicles – you still don’t have many anti-tank instruments. So, if you don’t use allies, you can use the hauler as a stationary shooting platform. Or just magnetize sponsons – it’s easy. 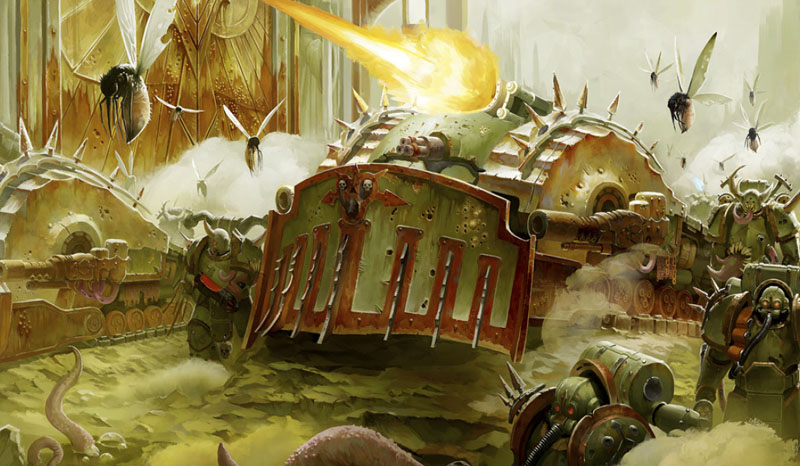 So, in case if you’ve also got the starter set, Rhino and Typhus (he’s cool, really), you have something about 1400 points. Let’s make it at least 2000. Here we must decide – whether we are going for tournament play, or trying to create fan-based thematical roster. In the first case, you just need to take allied obliterators with a lord on jump pack. Or more mortars. But, honestly, Death Guard doesn’t feel very well in tournament metagame. So, let’s try to make something more interesting.

Since we’ve chosen a hard way, let’s take our close combat death star. Add Tallyman there. He must be a warlord with the 6th trait so that to let his guys re-roll everything. Also, take an artifact helmet – this way his aura will become 10 inches. Quite expensive, but effective. 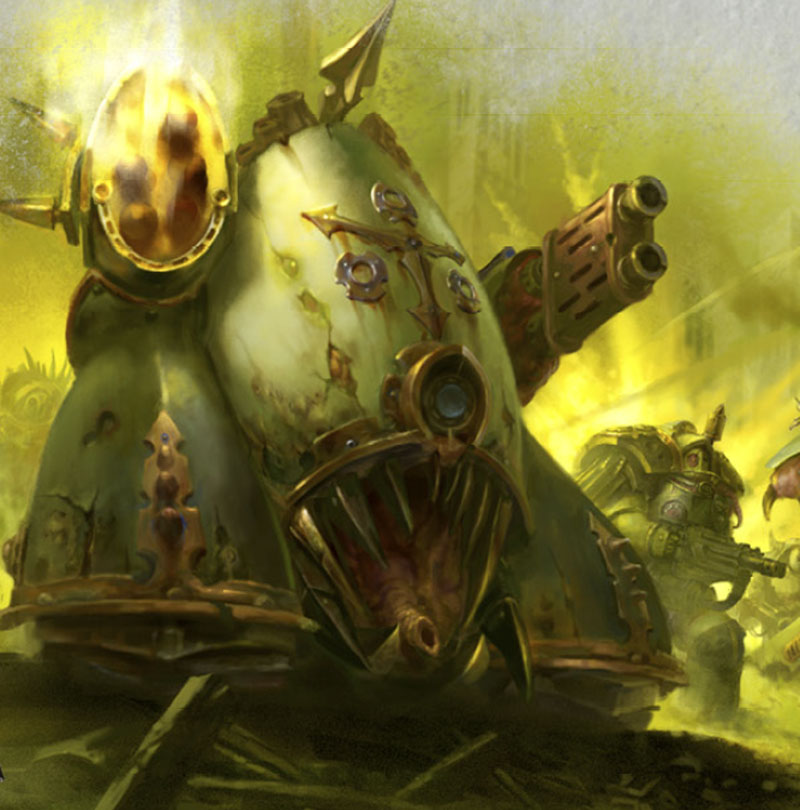 Also try to find 20 more zombies. Two units of 20 models will become a nice screen and can hold objectives really long. And if you power them up with Typhus and magic, they can even become a nice close combat unit. Sure, painting so many similar but detailed miniatures is a challenge, but at least you can try different techniques. The second plague marines unit from the starter can be taken with range wargear in one more Rhino. Also add there Foul Blightspawn. Or may be two. This guy’s flamer can destroy anything if you are lucky with dice. Also, he works well with Biologus Purifier. Using him and the stratagem, you can deal serious damage with grenades. If you get close enough. 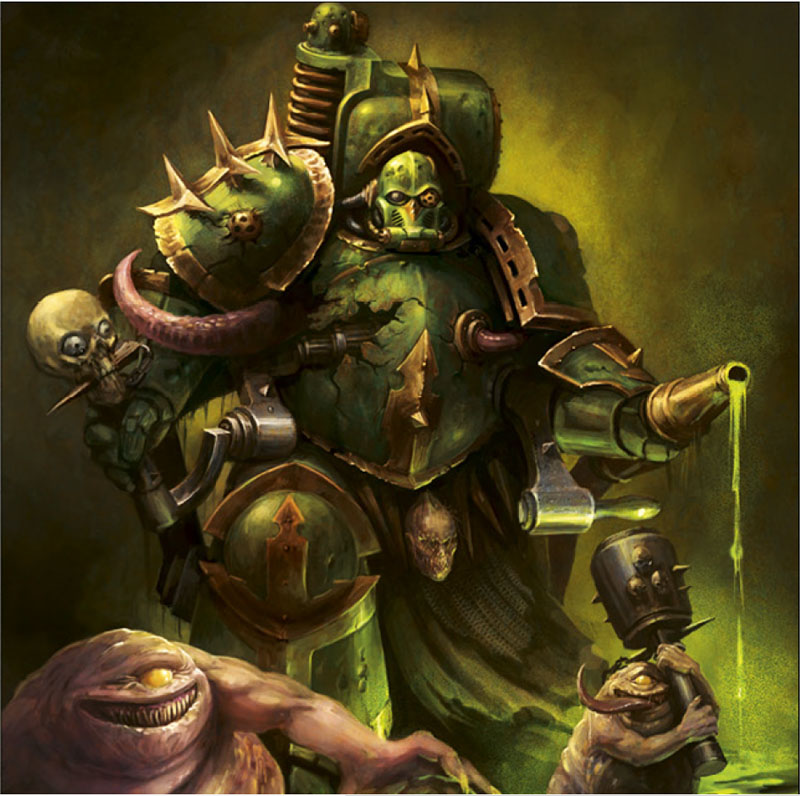 Myphitic Blight Hauler is another useful unit. If you have enough points, take a couple of them. Luckily, the box is cheap. They can provide some heavy weapon support and also cover your slow but resilient units. Also, Death Guard is the only Chaos army that can find Hellbrute useful. Their legion ability lets him move and shoot his lascannon (what else?) with no penalty. So, you can also use his close combat potential and make him maximally effective. 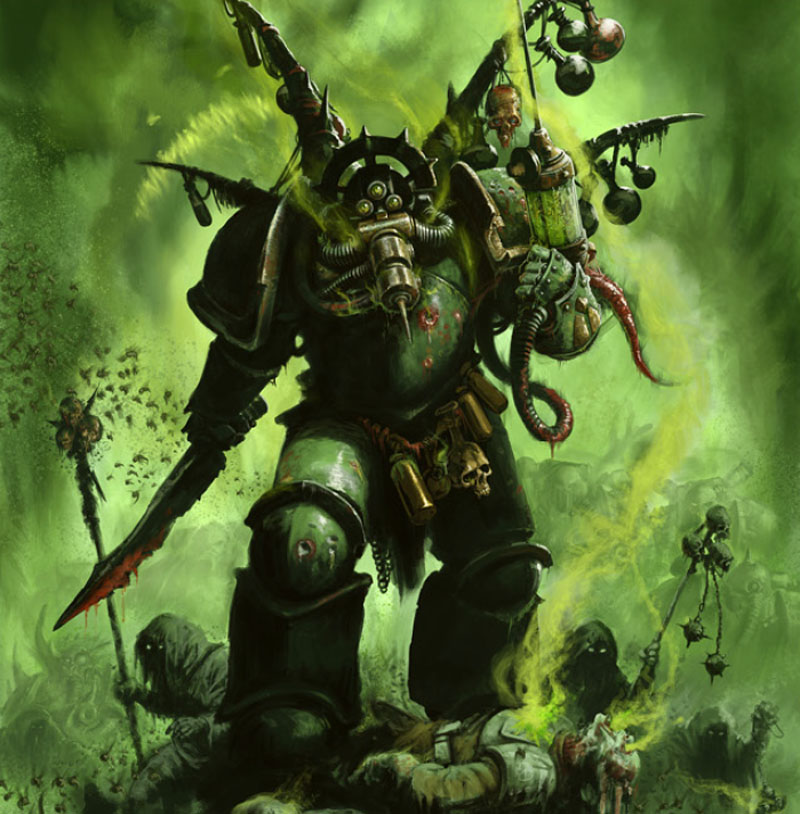 All these units compose a roster of 2000 points depending on the wargear you take. It’s easy to make it 2500 – just take Mortarion. He’s quite deadly and doesn’t really need support. The main thing – don’t forget to cast -1 to hit every turn. There’s no way to heal him, so, unprotected, he dies very fast. 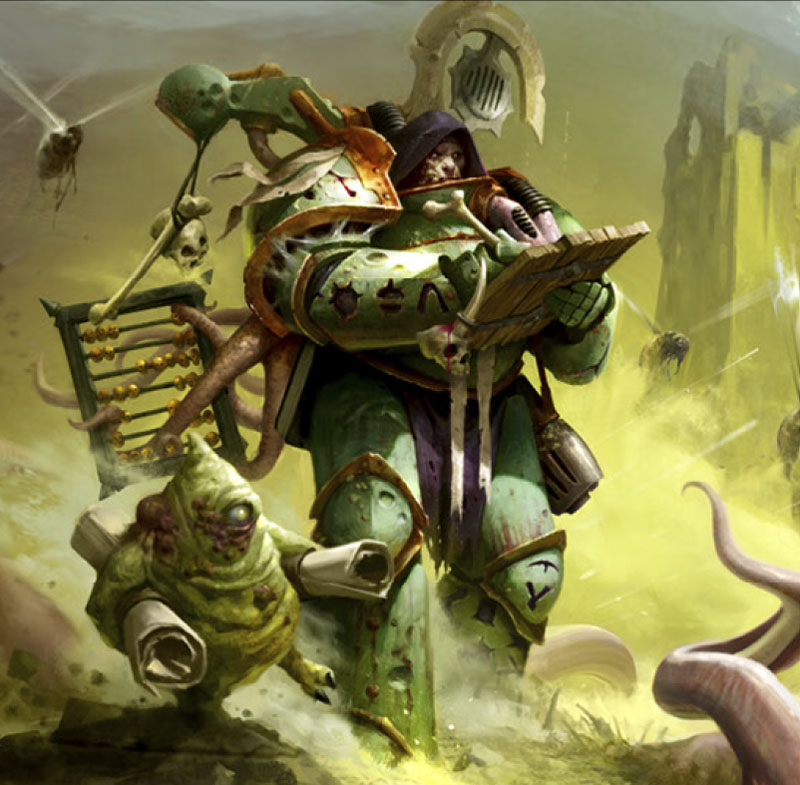 Well, that’s not cheap at all, but this way you get almost all new Death Guard miniatures and a playable roster. This army slowly moves towards the enemy in several waves – just as was expected before the codex. It’s also very important to remember about all the auras and abilities – there's a lot of them and this makes gameplay really interesting. 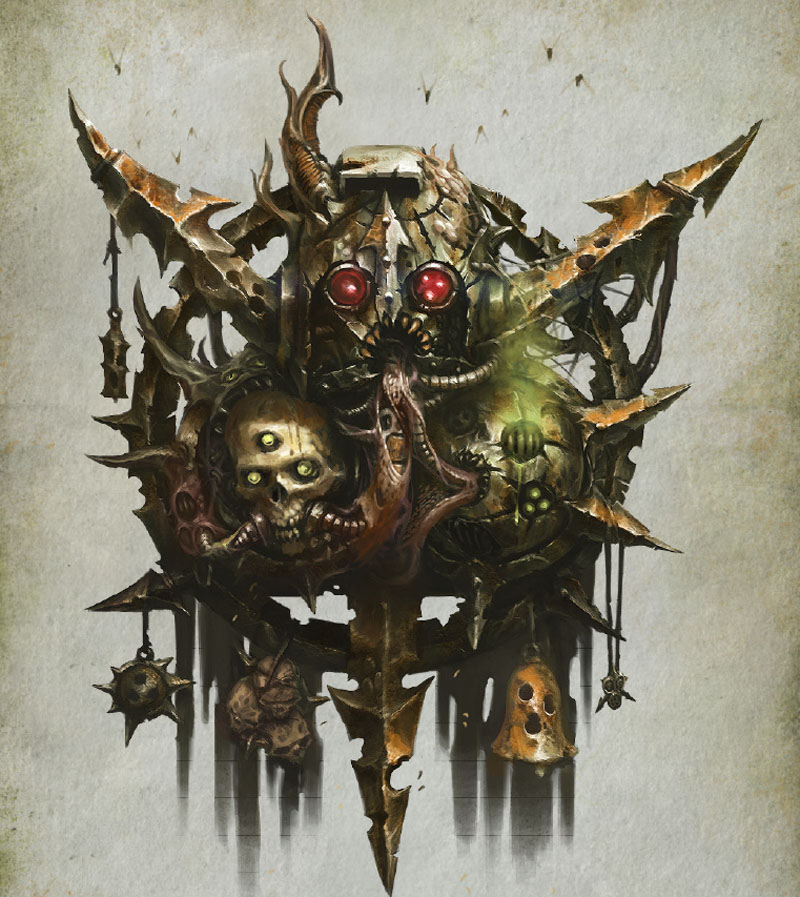