Looking at the second big F.A.Q. for Warhammer 40K

Looking at the second big F.A.Q. for Warhammer 40K

Games Workshop keep their word, and continue to update the rules of Warhammer 40K. Now, in order to play it, you need to take not only the rulebook and the codex, but also a dozen printed pages with changes relating to your army.

In recently published F.A.Q. you can see two global trends - the absence of radical changes, obviously left for Chapter Approved, and the approval of all the beta rules proposed earlier. With minor changes. Therefore, the new beta rules can be considered as already relevant. 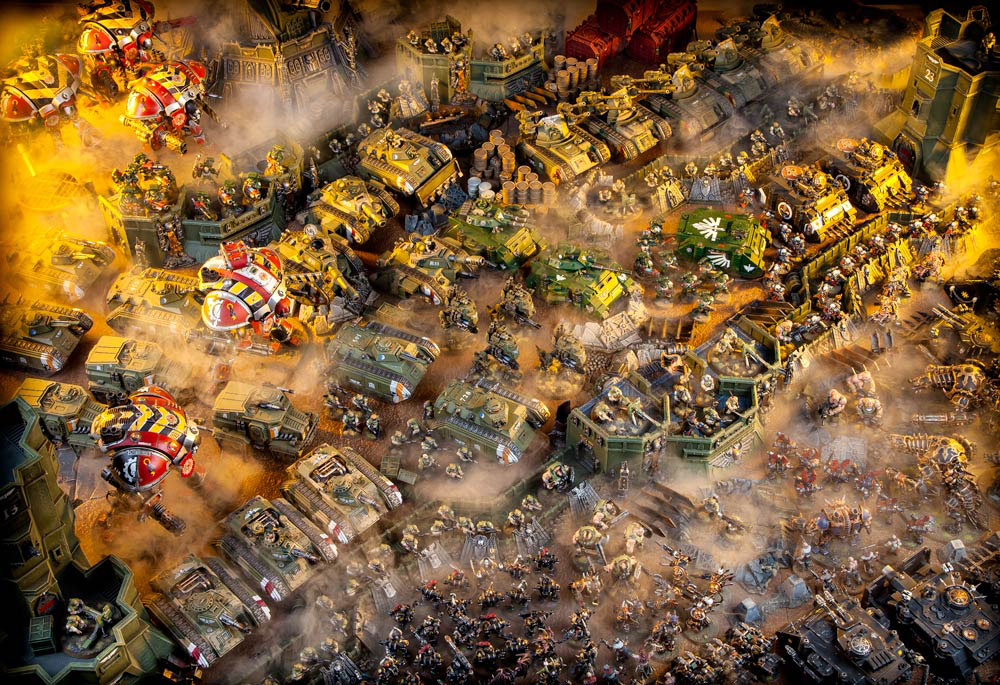 You surely know about changes in Smite, armies’ keywords, and character targeting rules – they remained the same since the last F.A.Q. However, the beta rule about reserves changed a bit. 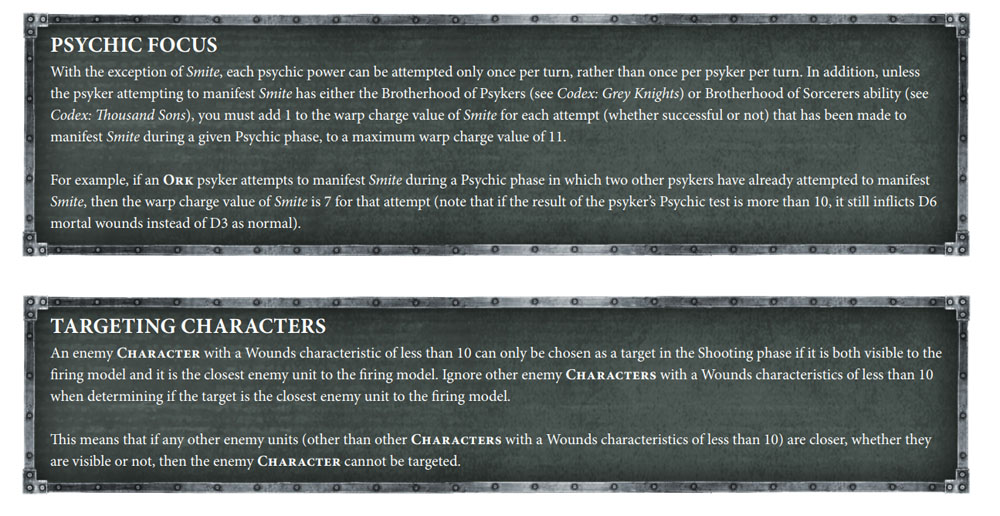 In the previously proposed rule, the number and power points value of the units taken into reserve should not exceed the same values of those left on the table. Now the power points have been replaced with points. It is still impossible to use reserves on the first turn, but now all the codex exceptions that allowed to do this have been replaced with a 9-inch scout-move.

What does this mean? Total annihilation of alpha strike tactics for everyone. Now the enemy has a whole turn to minimize the effectiveness of your incoming reserves. In addition, now there are fewer units in reserves. Who benefits? First of all, Stand-and-shoot-armies. Now they have more targets at the first turn, and they are better protected, because it became more difficult to shorten the distance - in fact, even the units that could set up immediately, but in any place, now still start in their deployment. 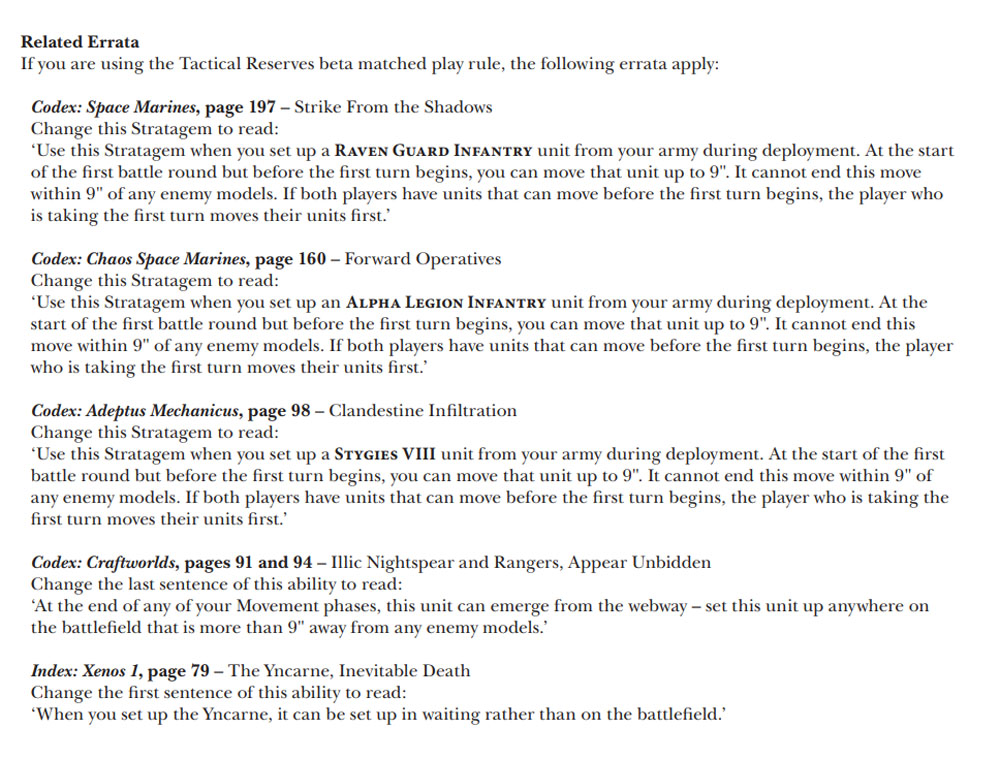 For example, instead of placing your Raven Guard Aggressors 9 inches from your opponent, you can only move them 9 inches from your deployment. Which leaves you far from the effective shooting position. Even considering their subsequent movement, it isn’t difficult for an opponent to deploy so that your Aggressors lost the targets.

The first move is generally one of the main problems, even judging by how much attention GW pays to this. The following new beta rule offers the second player, a stratagem, which gives a cover bonus on the first turn to absolutely all his units. For 2 CP. It sounds good, but it is practically useless. For example, for demons or harlequins, whose saving throw, even with this bonus, still does not exceed the invuln. And also, there are still armies capable of ignoring cover, or having such a number of shooting, that the bonus t doesn’t change anything. But the stratagem was supposed to help against these armies... In fact, it is difficult to come up with something radically different. If you replace the bonus cover, for example, with a penalty to hit, it will be too powerful, and then the players will simply strive to go second. In the absence of reserves, when you play for close-combat-army against Tau, it does not matter whether they will kill you before you move or after.

In addition, two command points are quite a lot. Especially, given that the following beta rule prohibits getting more than one point per turn for abilities that allow to generate / return / steal CP. This change is quite nice. Players for the Dark Eldar and the Guard will now have to think when choosing artifacts and stratagems. Many factional stratagems raised in value. Especially it concerns Agents of Vect, for which now costs 4 points – the most expensive one in the game. 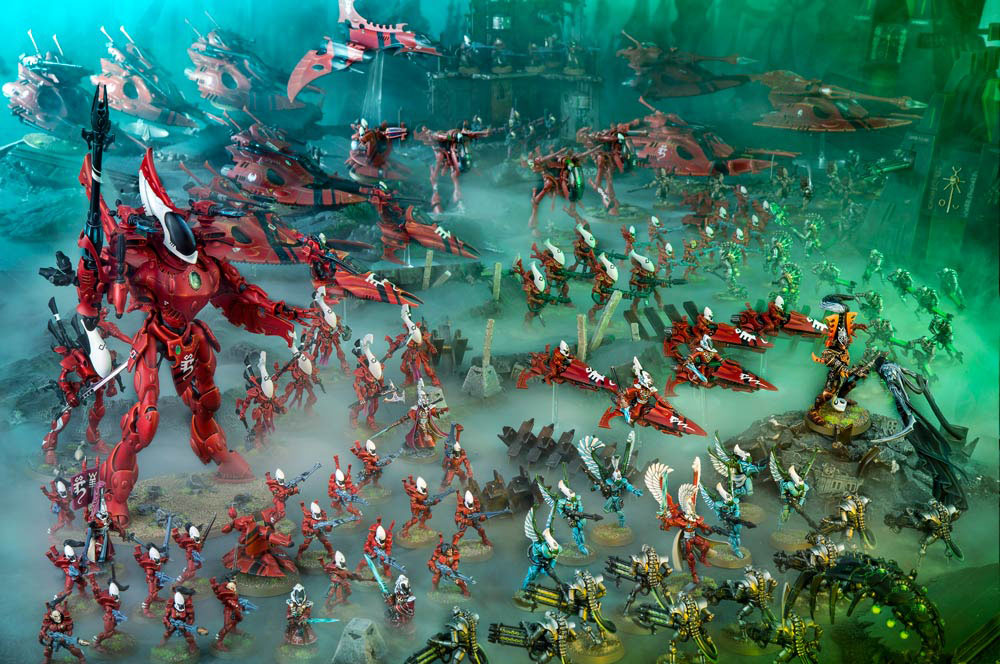 There is another important change not included in the general F.A.Q. that refers to the rulebook changes. However, it is very close to those already listed above. Now FLY Keyword Units do not ignore the terrain and enemy models when charging. This change was introduced to eliminate the situation when units landed in front of the ruins could have 0 inches charge up. In fact, it was logical and correct to prohibit it, although many people disagree. However, along with this, now you cannot fly over the enemy screen to attack characters, or tanks. Which, again, only strengthens the already strong stand-and-shoot-armies and weakens already insignificant role of the maneuver. 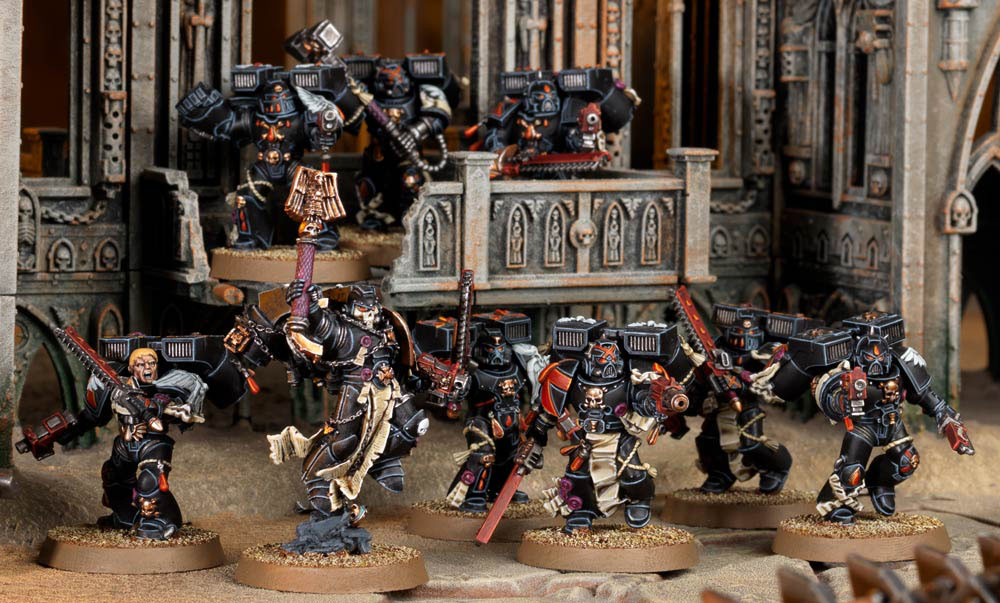 Now it seems that GW clearly understands what the main problems of modern rules are. But at the same time, they do not understand how to solve them. It seems that the changes, logical in their essence, correct some moments while exacerbating others. And It’s really unclear how to break this vicious circle.