We've waited for so long until we saw new Chaos tactical marines! Now the old ugly box is gone and we can get a load of a new set. Today we'll tell you everything about this box - what's in there, how to assemble, and how to use on the battlefield. 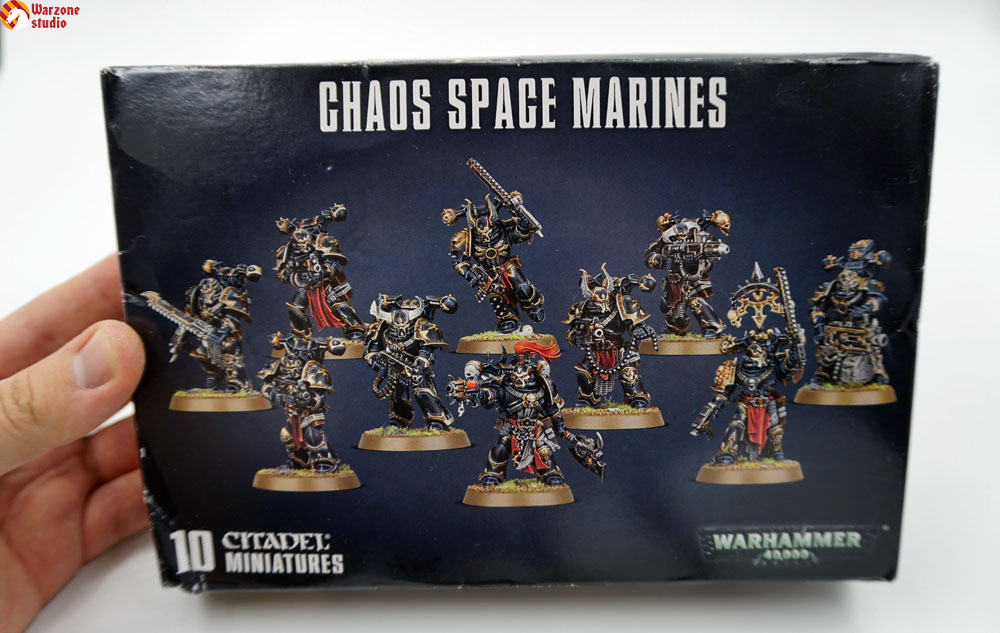 Obviously, there're 10 miniatures. No extra legs, so you won't be able to assemble any options. Shadowspear set is still on its way to us, so, we'll also think about models from it - it's easier to modify marines from a separate box. There we have 4 marines with chainswords, 3 with bolters, 1 with plasma gun, 1 with autocannon, and a champion with chainaxe and plasma pistol. 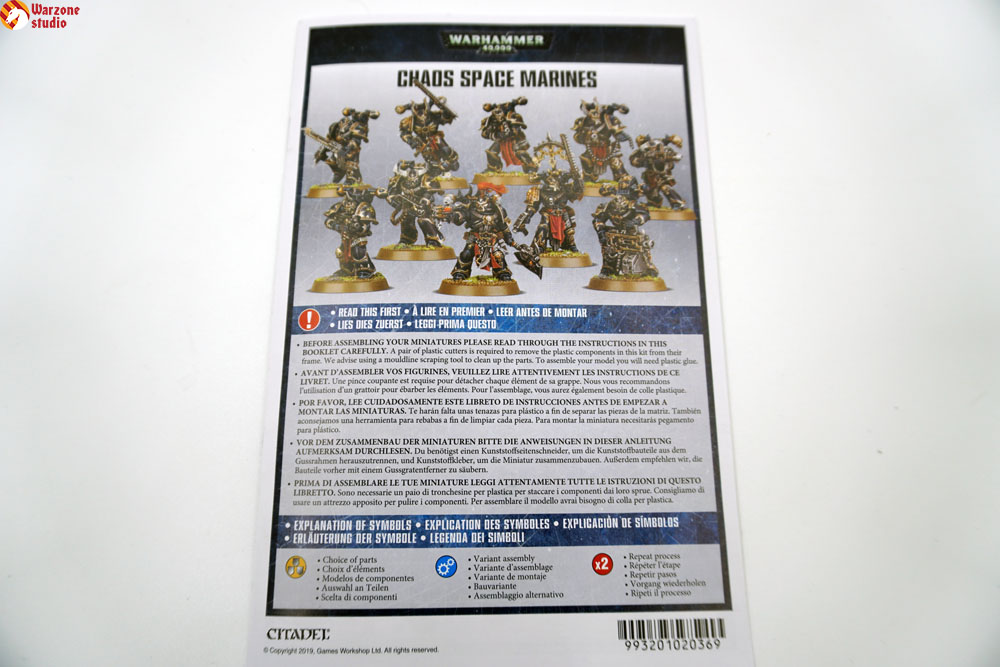 There are quite many options here. You can even make 2 champions, and assemble 2 squads of 5 from one box. For these champions, you have 2 plasma-pistols, power axe, power maul, power fist, and a regular chainsword. There are even 2 special backpacks options. Unfortunately, no combi-weapons. 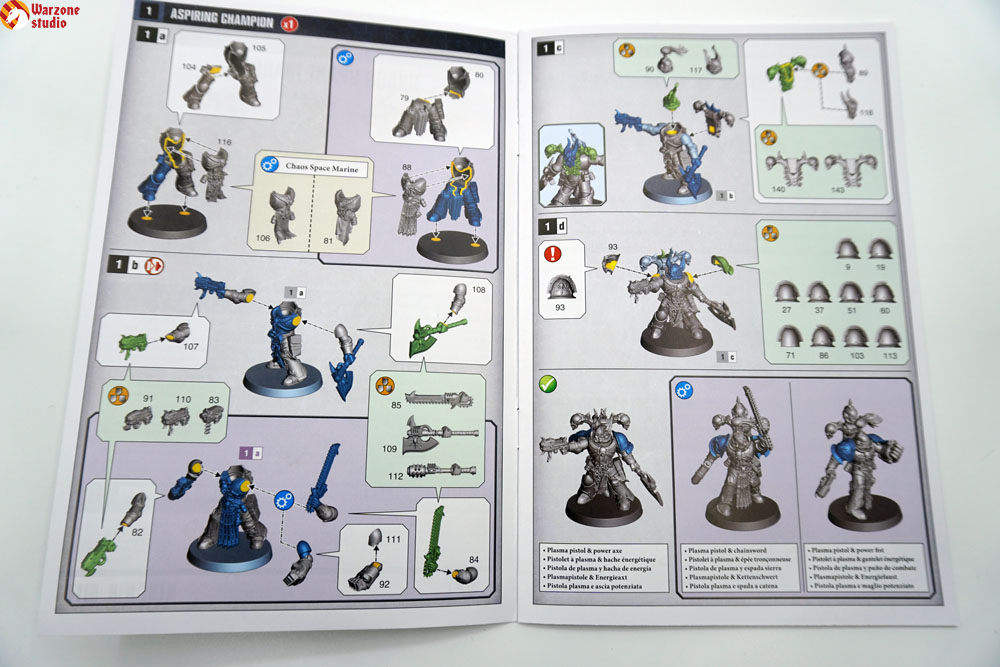 The rules allow us to take one fighter with special/heavy weapon if there are less than 10 people in the unit, and 2 of them, if there are 10 or more marines. Sure, you can have 2 similar weapons. But, unfortunately, in this set, you will find only a rocket launcher and heavy bolter. Sure, classic plasma-melta-flamer combination. But, in fact, it's ok. Rocket launcher is exactly the thing, you need to take in a cheap unit of 5 marines, that will score an objective somewhere behind, and support your main forces with some fire. So, we'll assemble such a unit first. A bad thing is that the guy with a rocket has only one option for his left hand - with a knife. Personally, I would like him to hold a weapon with both hands. 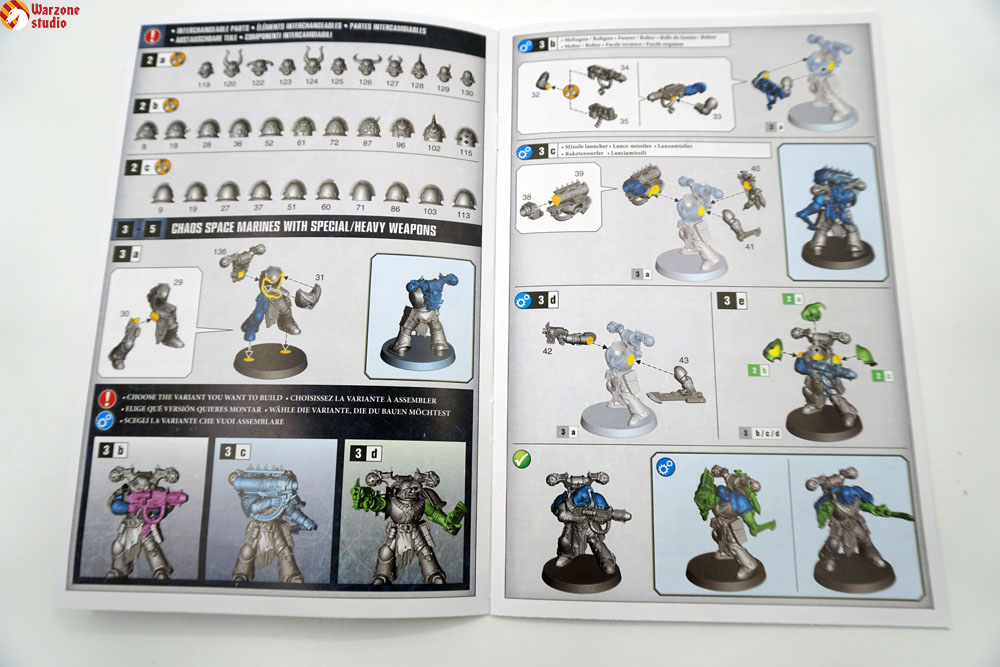 There's some good news for those, who were afraid, that it's impossible to assemble 10 guys with bolters. There're 9 of them in the set. Considering that 2 men will take special weapons, and one will become a champion, there's even an extra bolter left. But if you wanted to give chainswords to everyone, you might be disappointed - there are only 6 of them. 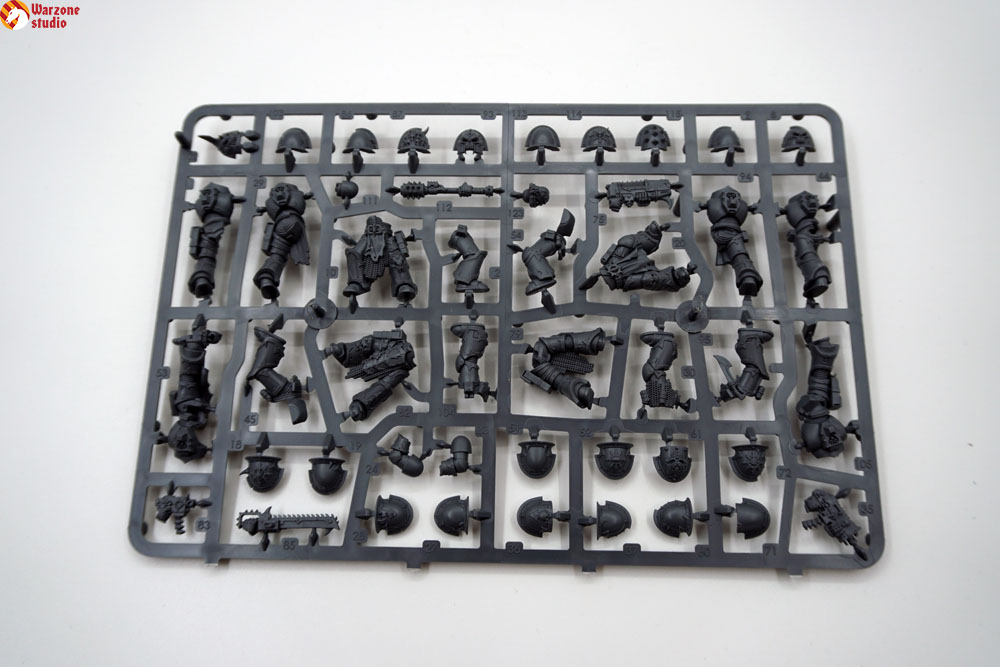 There're even some extra heads, but not too many. If you will get a second set, they will soon start to double. Considering that all bodies have only one pose, the variability is not that huge. But along with Shhadowspear, we'll have 20 tactical marines, which is quite enough, considering that cultists are now still the main troops choice. 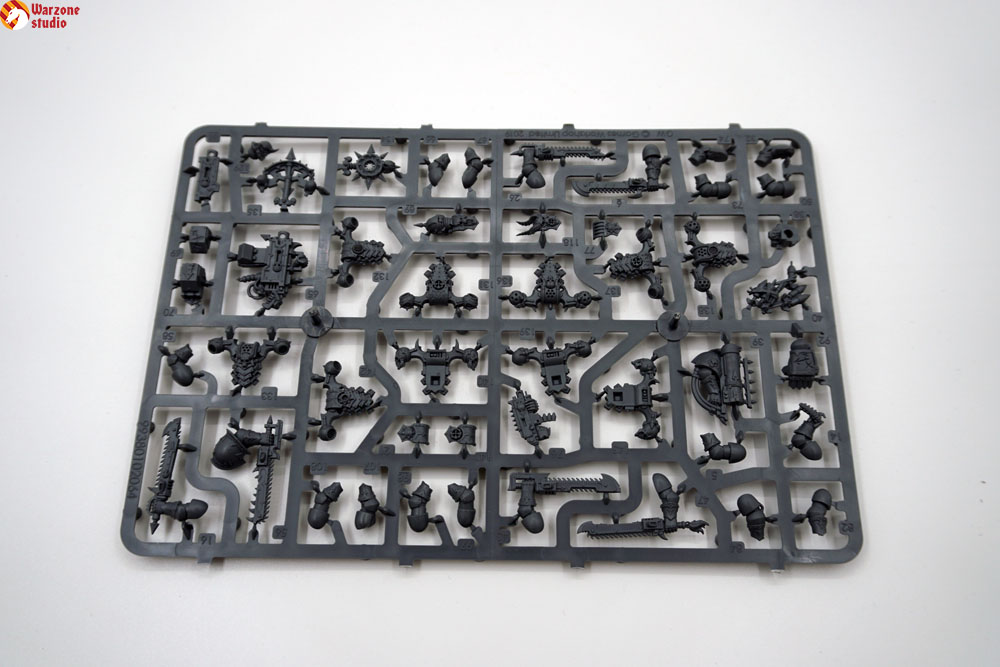 So, you can assemble the rest 4 with simple bolters, and make the 5th one the champion. You can add here auto-cannon or plasma gun from Shadowspear, and use the rest bolter guys to make 10 in one of these units. Chainsword marines can accompany some characters as a live shield. 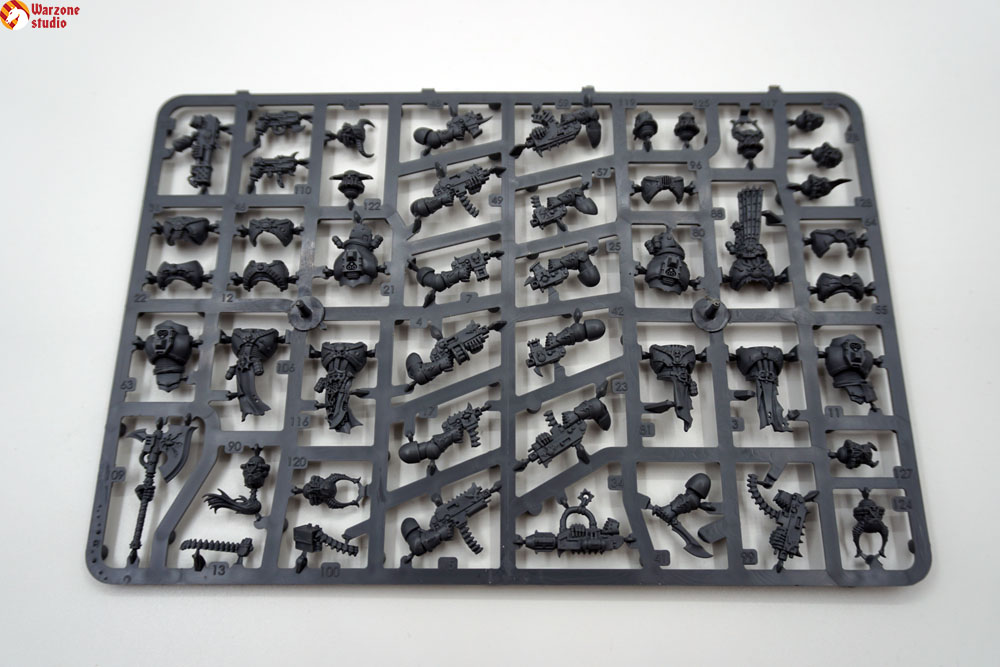 By the way, there are also new decals. For all the first founding Legions.Except for Death GUart, who have no place to glue them, and for Emperor's Children and World Eaters. Which confirms, that their release is somewhere ahead. The only drawback is that there're no more decals for Red Corsairs. 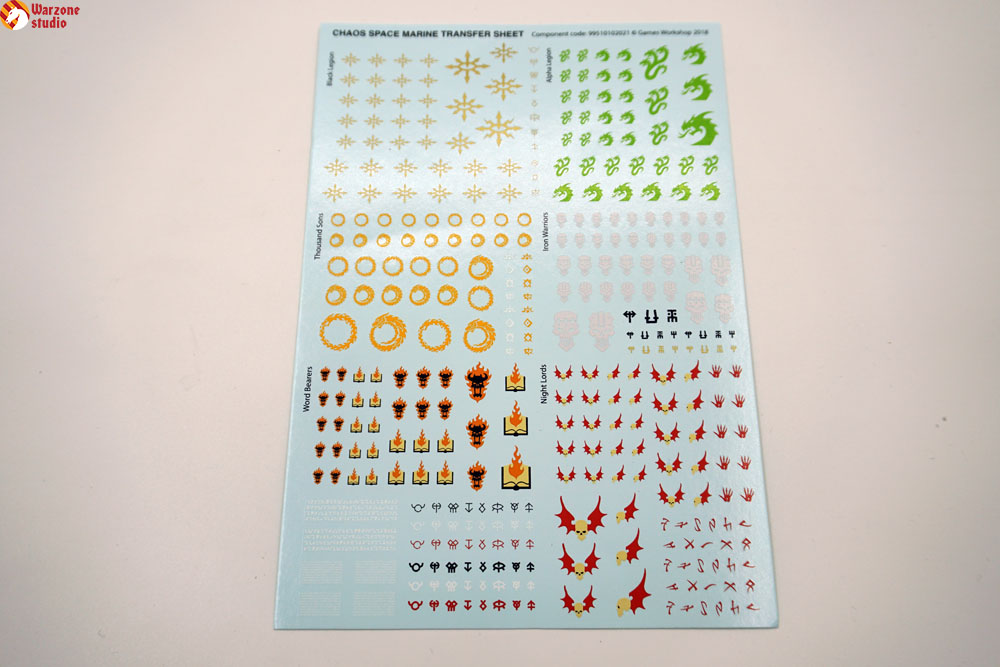 So, this is a basic unit, we've got. We decided not to start the rest 5 models until Shadowspear arrives. Really liked the design of weapons and armor here. You really feel that these marines fought multiple battles all over the galaxy. 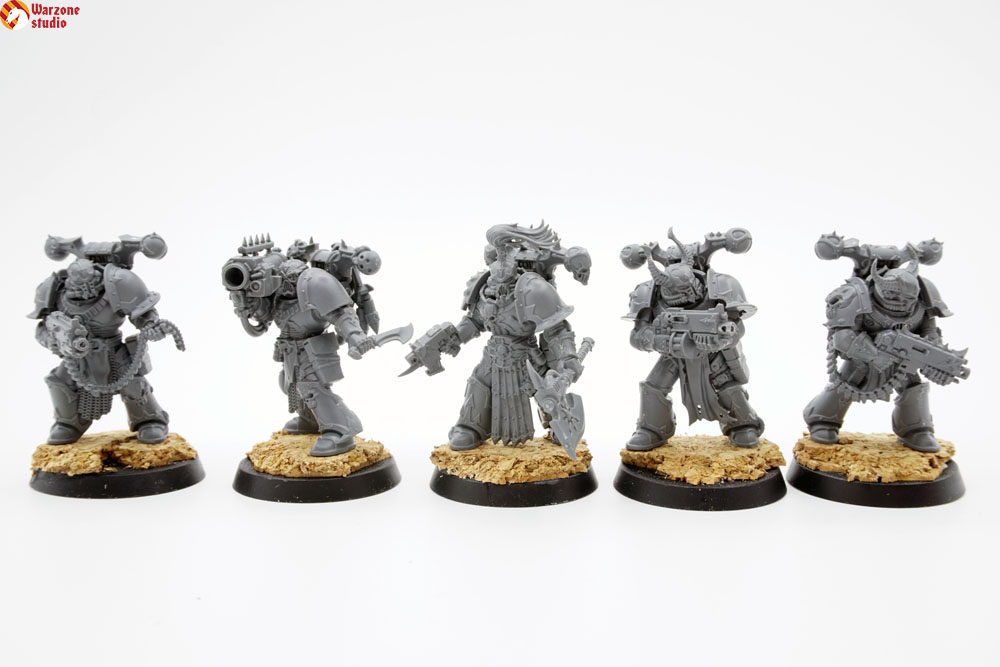 P.S. The miniatures have the same size as Rubric and Plague marines. So, all your Chaos army will look solid, and you won't feel miserable, compared to the Primaris. 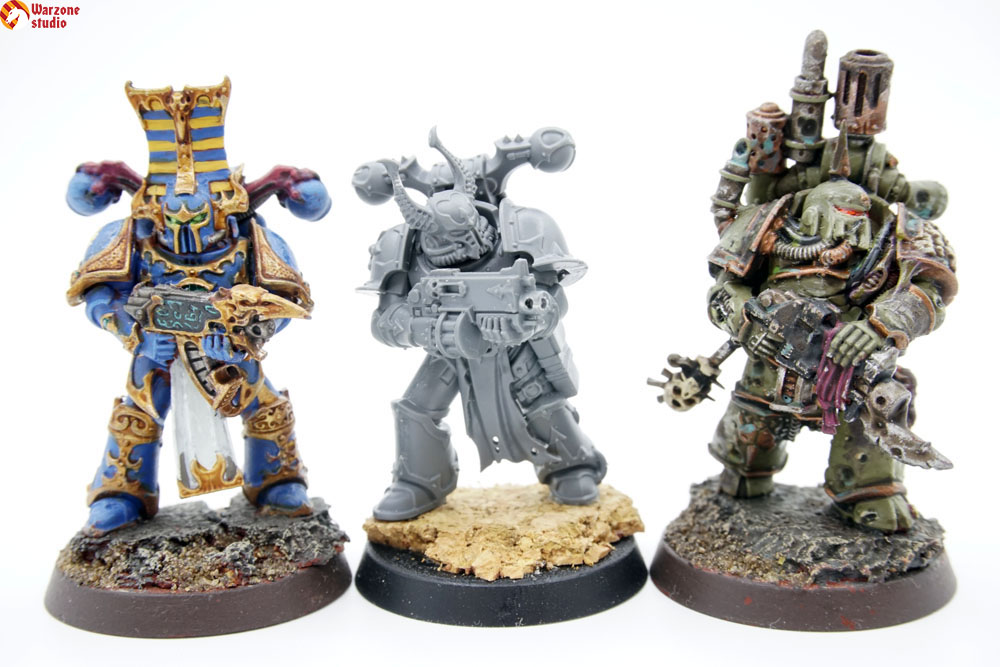