The long-awaited "underwater elves" - Idoneth Deepkin are released, and now we can speak about them as a full-fledged army. What impression do they make?

In fact, the keyword describing this army will be "duality." On the one hand, the very concept of a naval force that has come out on land is very interesting and fresh. On the other hand, we would like more rules reflecting this. On the one hand - well-designed, very detailed miniatures. On the other hand, design causes controversy among players, and many don’t like it. Let's look at it all in order. 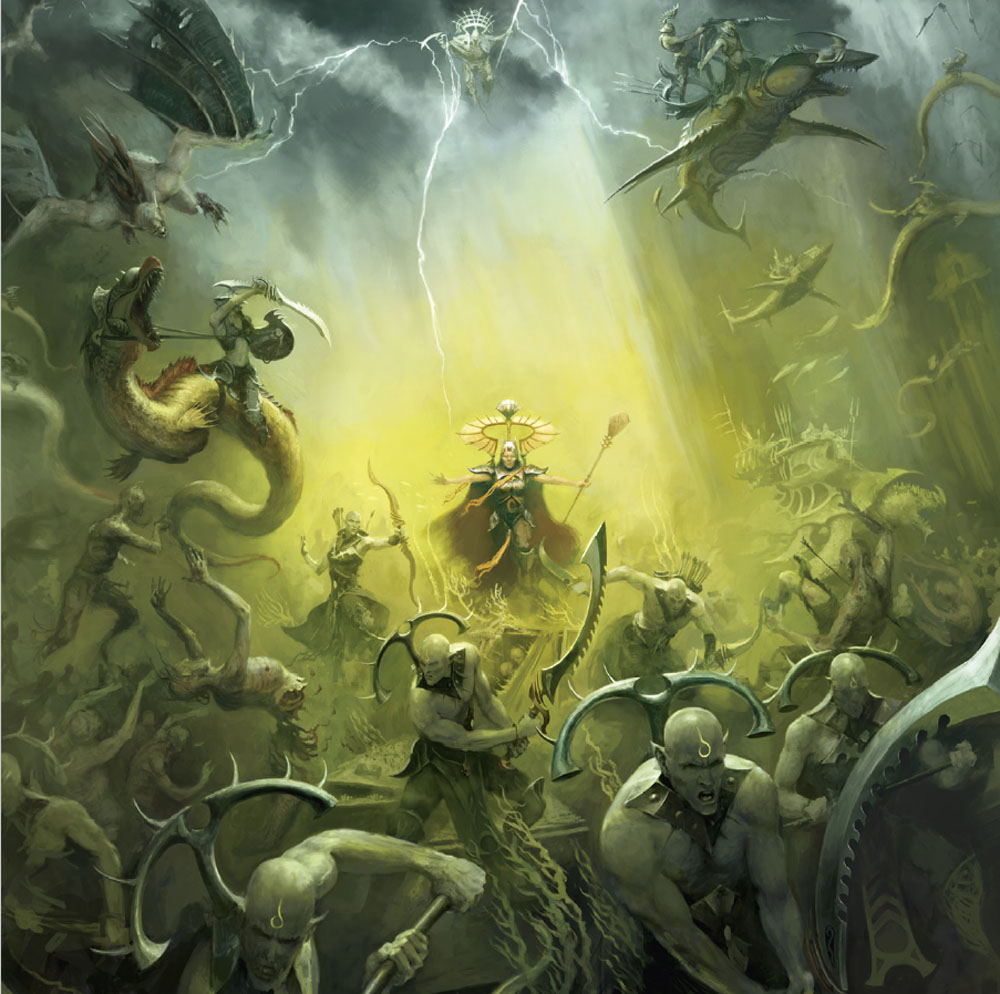 General rules of the army - undoubtful success. Since the Idoneths fight in the ethereal sea, in fact, creating conditions similar to underwater, on land, the enemy should feel worse. So, his range attacks can only target the closest visible Idoneth unit. It sounds incredibly cool until we remember that we are not playing 40K, and the main damage here is still applied in close combat. However, for some rosters and armies (hello, Kharadrons), Idoneths are one of the most uncomfortable opponents. 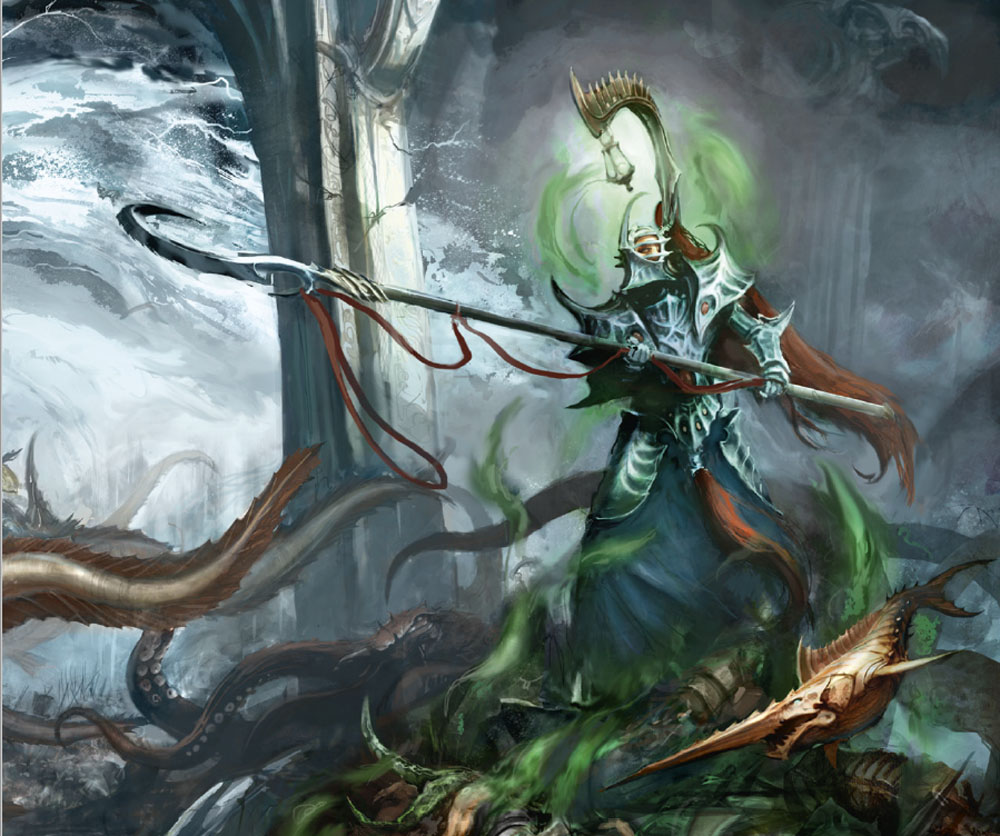 The next feature is also very interesting - Tides of Death. Every turn has a certain effect on the whole army. Unlike daughters of Khaine’s, they are not cumulative but change with each turn. The idea is quite clear - growing with each turn, these waves lead your army into a furious hand-to-hand. On the first turn, all units receive a bonus from cover, on the second move they can run + shoot, or run + charge, on the third - absolutely the whole army hits first in close combat, and on the fourth - can retreat, and then charge or shoot. 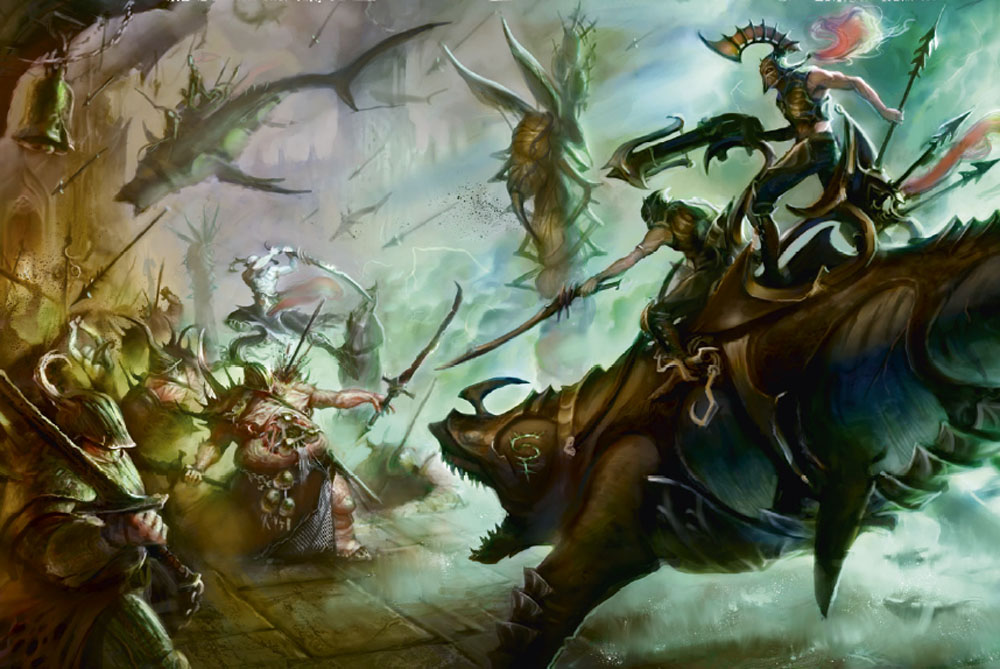 Now, this is really a powerful ability. It forces you to adjust all the gameplay to this rhythm and strive for melee from the very first turn. Luckily, there are enough mobile and dangerous fighters in this army. However, this requires training and a certain skill - the enemy, knowing what to expect, may break this scheme by imposing a fight at the second turn. Really a new scheme that forces both players to change the style of the game and think a lot. Unfortunately, this is perhaps the most interesting thing that the army of Idoneths has.

But when we get to the artifacts, there is a slight... bewilderment. There is a feeling that they were invented by people responsible for Demons and Tau codices in 40K. Disposable artifacts that you are unlikely to ever take, -1 for hit, re-rolls, mortal wounds... Everything is maximally standard and non-inventive, in all three groups. Only one in each group, implicating the 2D6 mechanics, is at least something original. Warlord traits also don’t add anything special, and most likely you will take one that gives +2 wounds. 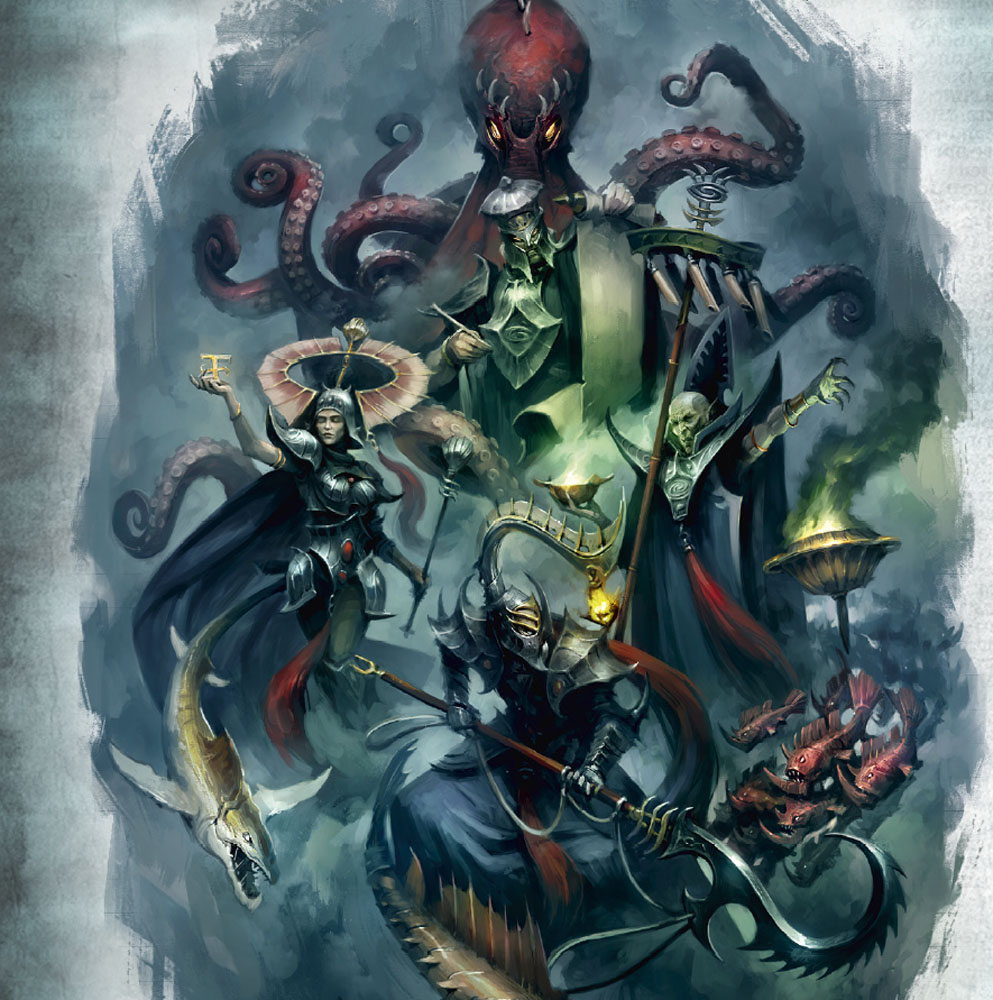 At the stage of creating the magic, gamedesign, apparently, again was given into the hands of adequate people, because the spells are quite interesting and reflect the background of the army. The most interesting is the abilities to teleport units 24 inches far, and immediately slay the enemy character with the pressure of the water column, if your D6 roll is greater than the number of his wounds. Although, we have already seen something similar in other armies. There are also rituals that are quite difficult to create without special roster building. Again, you will use the one that strengthens the Eidolons - these already powerful units, get a full reroll of hits and casts, and heal one wound. Making the enemy lose the benefit from cover or forbidding them to fly - is not something for which you will build a scheme with many priests. 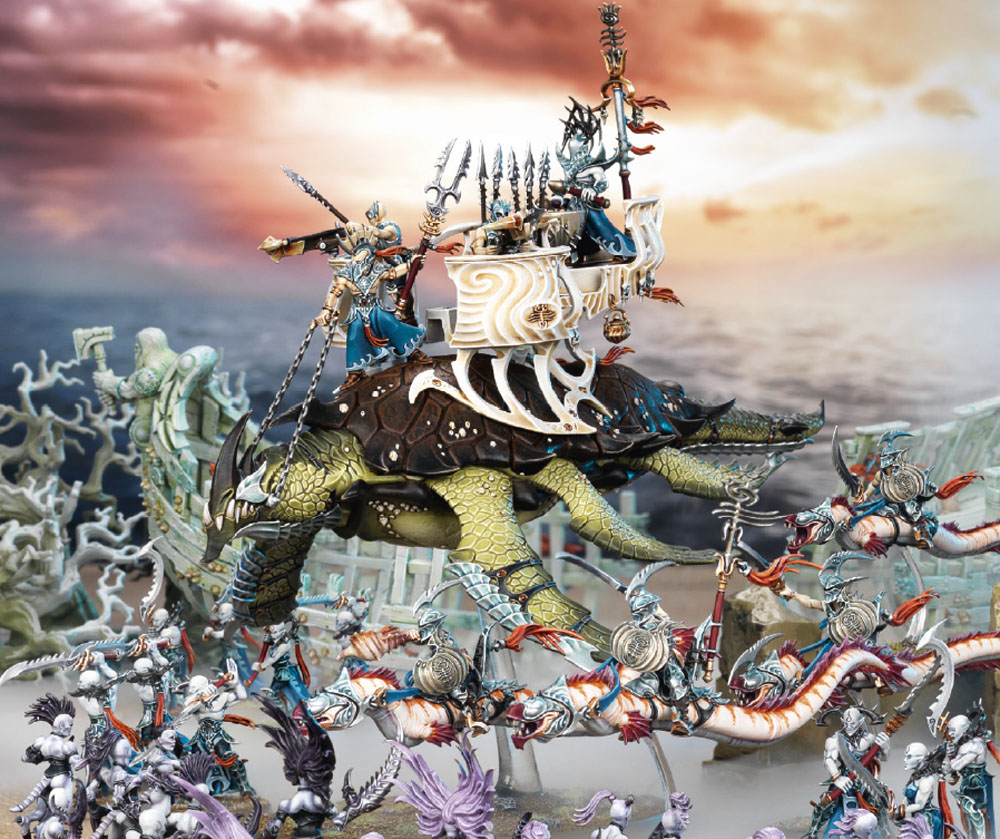 The possibility of choosing a certain enclave for your army is quite interesting. This allows you to strengthen the units that you like most. And, not only with banal rerolls, but by increasing the number of models in the unit, special spells, or even the ability to share the Tides of Death to allies. 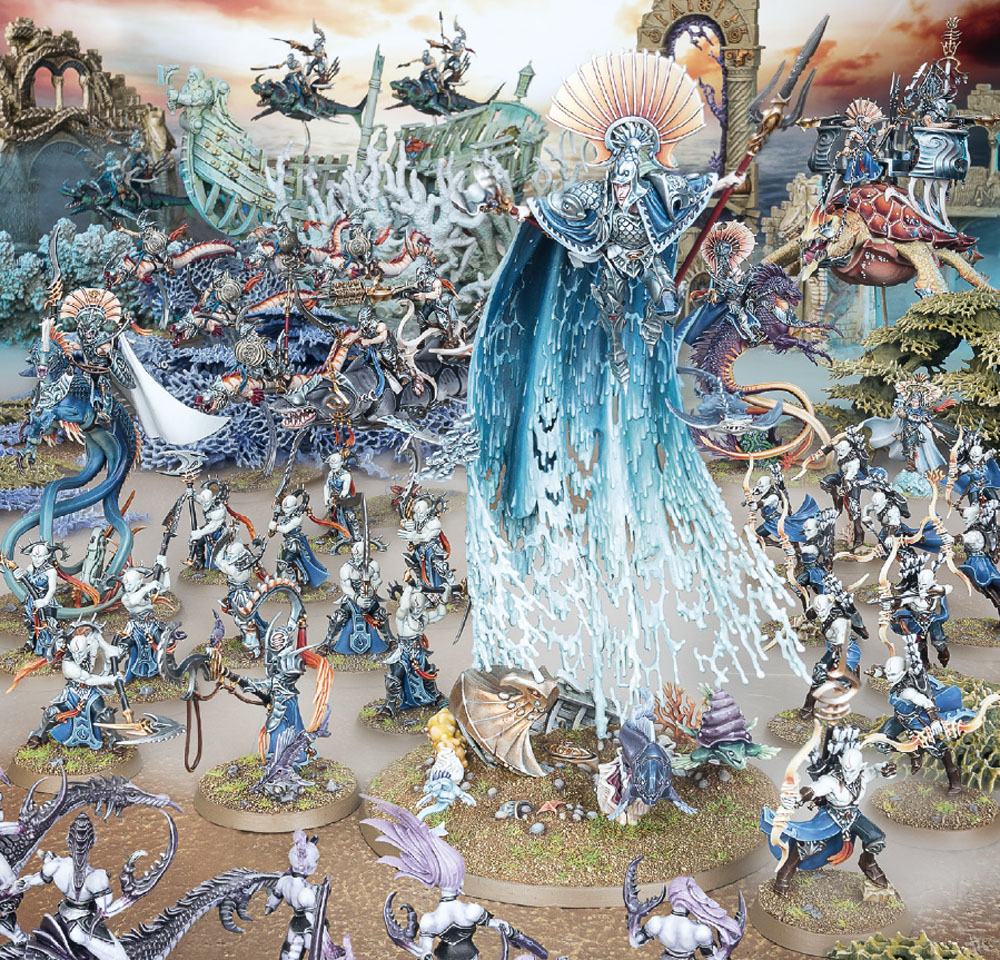 There’s no need to focus on units in detail - you can read the warskroll yourself. The main idea is that they are all pretty fast, and are aimed mainly at close combat - which is kind of expected. Given that the faction is new, and all the boxes were produced specifically for this book, there are no useless ones - absolutely everyone will find use on the table, and at least play "above average".

In general, we have a rather strange situation. There is a new, unique army, with an unusual background, and a model series, but at the same time, there is no particular reason to play them. People come in Age of Sigmar for the sake of unique, interesting rules, and there are already enough armies with universal rules in 40K.