We’ve already discussed starter Nighthaunt models. Now it’s time for Stormcast Eternals. In fact, their starter part is not as nice way to start an army, as Nighthaunts have. We’ll tell you why.

Let’s start with the smallest starter set – Storm Strike. There are 2 Sequitors, 3 Castigators, and a Gryph-hound. 3 Castigators make a complete unit, so everything is fine with them. But it’s a mystery – what to do with 3 Sequitors while they have a minimal unit of 5. And sure, there’s no use of the lonely hound. Since all these sets can be bought separately, you can definitely avoid taking the whole starter and get only a small Castigators box. But if you need terrain and AWESOME Sequitor girl (seriously, might be the best female model in the whole game), you still can take a starter set. By the way, we’ll talk about female models later. 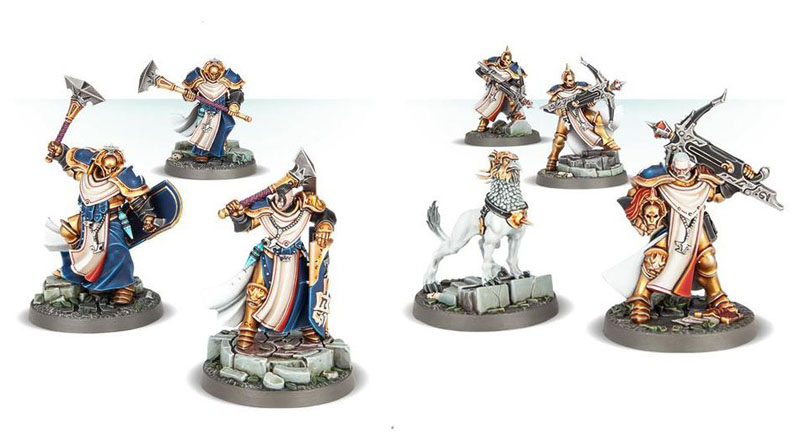 In the middle starter, Tempest of Souls, we see a more logical set of miniatures. Again, 3 Castigators, Ballista, 5 Sequitors, as it should be, 2 (strange again) Evocators and Knight Incantor. Castigators and Ballista immediately go to the battlefield, but the others have some issues. 5 Sequitors may seem perfect. But, in fact, there are 2 Primes – one with a great mace, and the other – with a usual one. So, if you care of what miniatures your unit consists of, and you don’t want to use the Prime as a usual Sequitor, you have some problems. However, here we can use the guys from the small starter set. We’ve taken these two boxes if you remember. The rules say that 2 Sequitors and Prime can take a Greatmace – so we’ll get this kind of unit and 3 extra miniatures to train your painting skills.

By the way, we’ve already tried them in combat. Such fully equipped unit can destroy almost any non-elite unit, nonetheless, it’s battleline and doesn’t cost much itself. It even can seriously harm an elite unit if you are lucky with dice. Also, they are not so dangerous, that the enemy could focus them – this way they can easily reach their target unharmed. 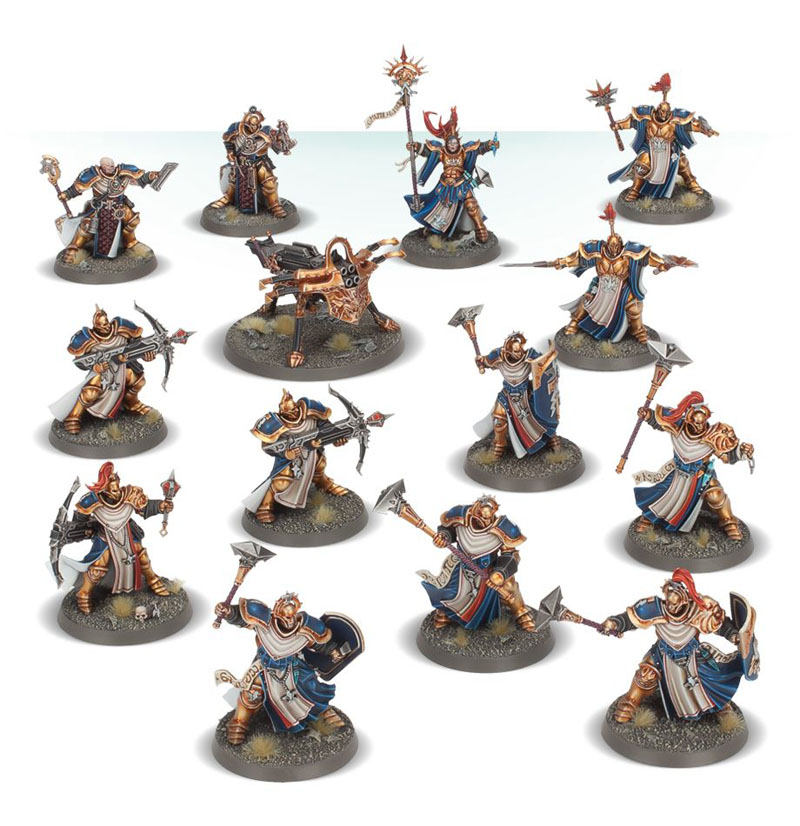 Let’s get back to the starter sets. 2 Evocators don’t do anything in this game. There are 3 of them in the big starter, so whatever box you take, you’ll have to buy a separate set anyway. But the box of Evocators is worth buying! Full range of options with any weapons, charismatic postures, and cool heads with no helmets. Also, you can assemble Knight Incantor from this box. Here’s the part, where we need our 2 guys from the starter – to substitute one used model. However, it’s better to use that awesome old guy as Lord Arcanum – the same wargear and the same luxury armor. We need him more – he can cast a normal Arcane Bolt from the 1st edition, and makes our Sequitors a battleline choice. We already have Knight Incantor and he (or she) is quite useless.

Evocators themselves are a musthave choice. Not only because they are great fighters themselves, but because of the mortal wounds they deal with all the units nearby. It makes them perfect crown fighters. If they encounter a big enemy unit, they will definitely destroy the most part of them. Or Bravery test will. However, Evocators themselves, are vulnerable for those crowds. So, make sure you attack first. 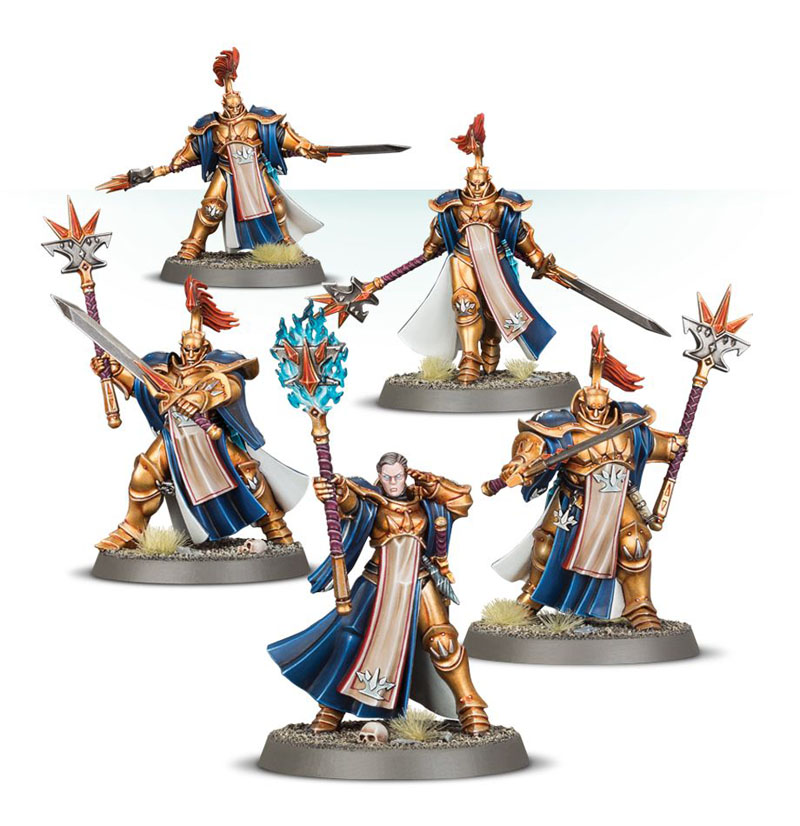 Now it’s time to talk about female miniatures. I don’t support the feminization of all the characters, which is so popular now, but I really like Stormcast girls. First – it doesn’t contradict backgrownd – they are not space marines anyway. Second – Sacrosanct chamber is made up of the wizards and aristocrats, and there are many women among them. Also, female Stormcasts just look cool. They dilute the army of the massive male miniatures which look almost the same. GW made their poses very impressive – maybe, intentionally, to make you love them. And the last argument – there’re always options, and you can make all your characters male. 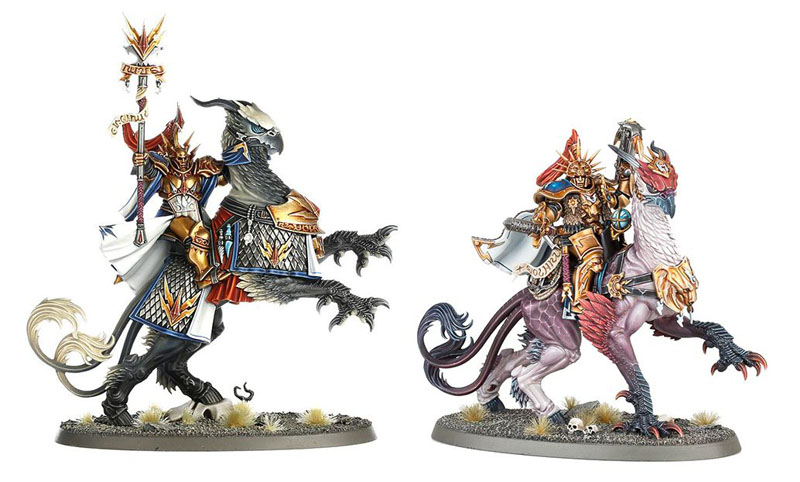 And what about the big starter set? There you gate one more frame with 3 Sequitors and 2 Castigators. And mounted Lord Arcanum, who is almost an exact copy of Lord Aquilor we already have. This doesn’t make things more logical, and also the sloppy work with the same miniature really disappoints. So, the best choice is the middle starter. In case if you already have the Core book and don’t want to deal with extra models. If you care about unit composition and you like that AWESOME Sequitor girl, you may also take a small one. And also, a separate box of Evocators – these guys are a must for your army. 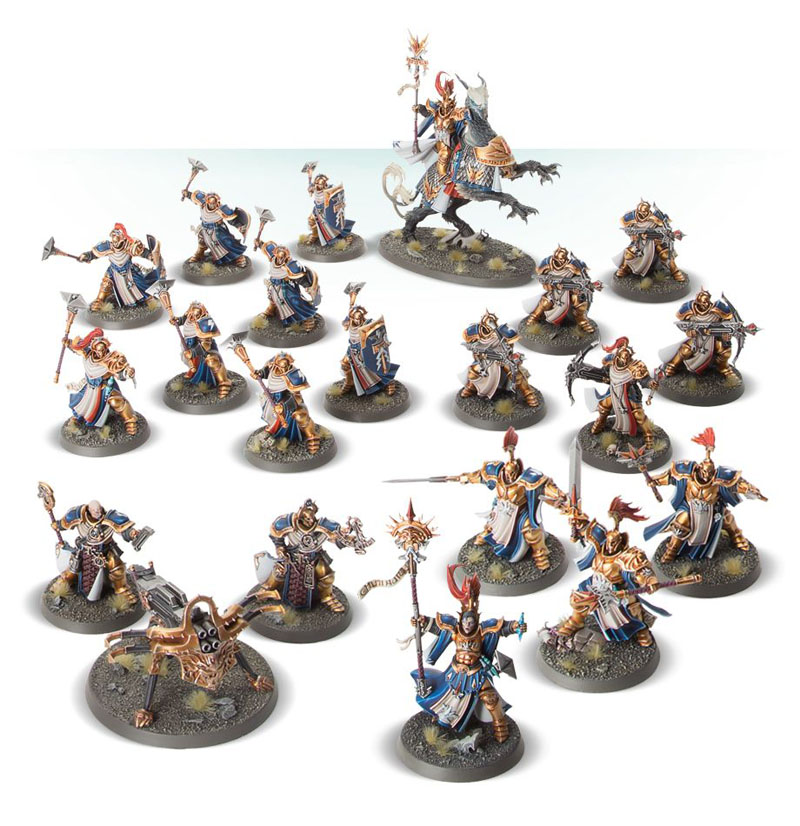